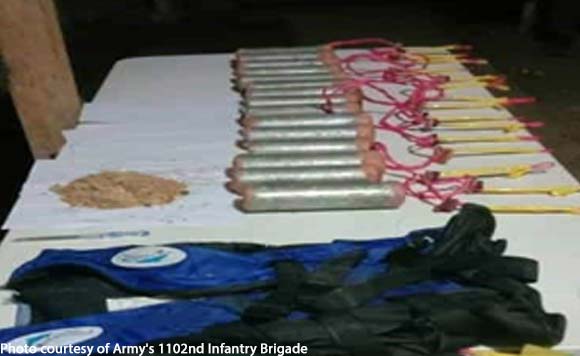 Patrimonio said the foreign terrorists were allegedly the husband and son of the foreign female suicide bomber, who attacked a military post on September 8 in kilometer 3, Barangay Tagbak, Indanan. The third one is a member of the Abu Sayyaf Group (ASG).

The thwarted September 8 suicide bomb attack resulted in the death of the bomber, described by the military as “a female person wearing black hijab.”

Patrimonio said the shootout ensued as the terrorists opened fire when they were flagged down by the troops of the Army’s 41st Infantry Battalion along the national road of Indanan.

He said the troops returned fire, resulting in the death of the three terrorists riding in a motorcycle.

Government troops recovered from the slain terrorists a .45-caliber pistol with ammunition, a hand grenade, and two vests with explosives and triggering devices.

According to Patrimonio, the recovered vests were identical to the vest used by the suicide bombers during the two bomb attacks on June 28 in Barangay Tanjung, Indanan, and on September 8 in Barangay Tagbak, also in Indanan.

“The hostile plan of the terrorists in Sulu could have caused tremendous casualties and could have tarnished the image of this country if not immediately acted upon by our soldiers. Hence, I commend them for such patriotic act,” he said.

\Maj. Gen. Corleto Vinluan Jr., Joint Task Force Sulu commander, lauded the soldiers who carried out the military operations for their sacrifices, superb planning and careful execution of their tasks to apprehend the suicide bombers.

“The AFP (Armed Forces of the Philippines) in Sulu will continue to hunt down all the remaining ASG members in Sulu. Hence, I urge them to surrender and live a normal life instead of being hunt down as a fleeing criminals and disgrace to the peace-loving Tausug Community,” Vinluan warned. (PNA)