‘House of Peace’ inaugurated in Basilan 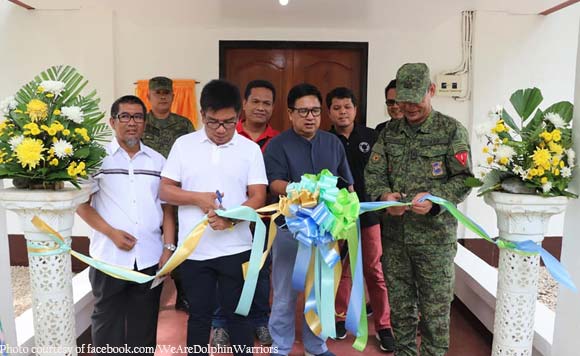 0 178
Share
Want more POLITIKO News? Get the latest newsfeed here. We publish dozens and dozens of politics-only news stories every hour. Click here to get to know more about your politiko - from trivial to crucial. it's our commitment to tell their stories. We follow your favorite POLITIKO like they are rockstars. If you are the politiko, always remember, your side is always our story. Read more. Find out more. Get the latest news here before it spreads on social media. Follow and bookmark this link. https://goo.gl/SvY8Kr

A facility for peace programs was opened inside a military headquarters in Basilan province.

According to Western Mindanao Command (Westmincom), the Baithussalam, which was constructed for four months, was inaugurated at the headquarters of the 4th Special Forces Battalion in Cabunbata, Isabela City Thursday, August 8.

The Baithussalam, which means “House of Peace” in Yakan dialect, was built through the collaborative efforts of the defunct regional government of Autonomous Region in Muslim Mindanao (ARMM) led by then governor and now Basilan Rep. Mujiv Hataman, the Armed Forces of the Philippines (AFP), Joint Task Force Basilan led by Brigadier General Fernando Reyeg, and Balay Mindanao Foundation, Inc., a peace and development foundation that aids in the Program Against Violent Extremism (PAVE) of the government.

“The facility will serve as the center for the conduct of the PAVE for peace programs, such as training, reformation, and development, of all rebel returnees in the province of Basilan who blindly fought for their ideology but finally decided to lay down their arms and return to the fold of the law,” Westmincom said.

During the inauguration, Reyeg urged everyone to give their full support and confidence to the AFP and to the PAVE program.

“I personally believe that our remarkable accomplishments in the campaign against radicalism and violent extremism should not only be attributed to the Armed Forces but to the local government units and the populace as well,” Lieutenant General Cirilito Sobejana, commander of Westmincom, said.

Food packs and financial assistance were provided to 207 rebel returnees during the event.