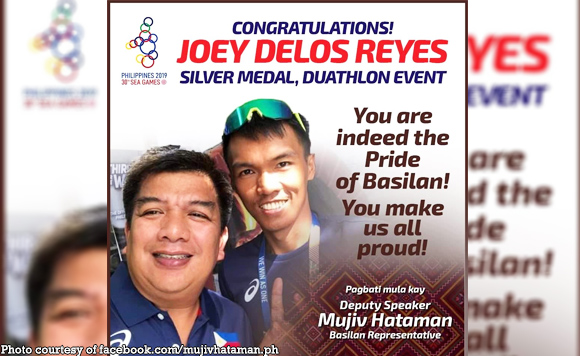 House Deputy Speaker and Basilan Rep. Mujiv Hataman on Tuesday hailed a duathlon athlete as “Basilan’s son” for winning a silver medal in the individual duathlon event at the 2019 Southeast Asian Games.

Joey Delos Reyes won second place in his event on Monday at the Subic Bay Boardwalk.

Hataman commended Delos Reyes, saying he truly earned his reputation as the “Pride of Basilan.”

“We are immensely proud of Joey for this wonderful win. We know he worked hard for this tournament and we are happy that all his hard work has paid off!” Hataman said.

“We in Basilan — the community as well as the national and local governments – promise to support our athletes and give them our best. I congratulate Joey for giving Basilan an honor in winning the Silver Medal in the SEA Games,” he added.

The 31-year old duathlete hails from Isabela City and is part of a two-man duathlon team to the SEA Games. The other one is Jarwyn Banatao, a proud Igorot from the Mountain Province.