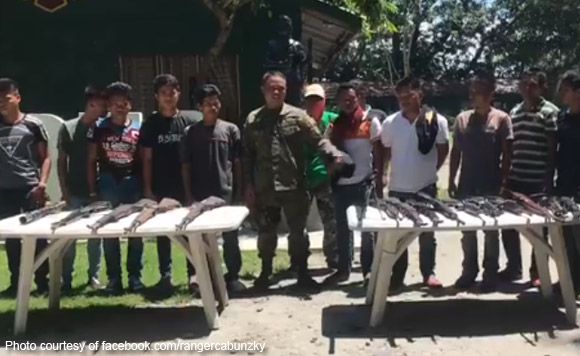 The military in Maguindanao on Saturday presented to Maguindanao Governor Esmael Mangudadatu the 11 former IS – linked Bangsamoro Islamic Freedom Fighters (BIFF) who earlier surrendered with their firearms.

Lt. Col. Harold Cabunoc, Army’s 33rd Infantry Battalion commander, personally presented the group of Sindatok Dilna to Esmael Mangudadatu, who welcomed them and urged them to help convince their comrades to surrender and avail of government’s livelihood program.

Cabunoc convinced the BIFF faction to surrender and live normal lives following a series of negotiations with the help of Mayor Abdulkarim Langkuno of Paglat town in Maguindanao.

The former armed men, labeled as terrorists by the Department of National Defense after they pledge allegiance to the ISIS, turned over 11 high-powered firearms.

Dilna admitted he lost more than three dozens of armed followers in clashes with elements of the Army’s 6th Infantry Division.

Tasli Sanoy, another senior BIFF leader, said his group decided to surrender because of the opportunity provided by the governor and military.

Aside from cash assistance, Esmael Mangudadatu also provided the returnees with farming and fishing equipment so that their livelihood becomes legitimate and productive.

Esmael Mangudadatu also promised to provide scholarship for children of the BIFF who decided to surrender. (PNA)

Sophia Parojinog misses papa Aldong: ‘I will always choose to fight for you’