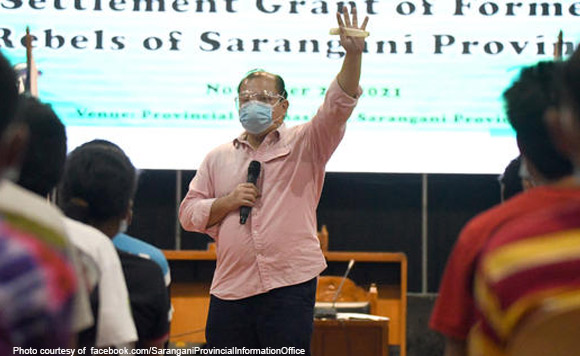 Sarangani Governor Steve Chiongbian Solon has conveyed the sincerity of his administration to former rebels who have returned to the fold of the law.

Solon also led the distribution of assistance, such as the livelihood settlement grant of P20,000 each to the 79 former rebels in a program held recently at Capitol Gym in Alabel, Sarangani.

The activity was conducted in support of Executive Order No. 70 signed by President Rodrigo Duterte in December 2018 to end local communist armed conflict (Elcac).

The governor also urged the the former rebels to have themselves vaccinated against Covid-19 and gave additional P1,000 each for those who have already taken their jabs.

Of the 79 ex-communists, four came from Malungon, 34 from Malapatan, 19 from Alabel, five from Kiamba, nine from Glan, and eight from Maasim.

Aside from the cash assistance, the former rebels also received social services such as psychosocial intervention, and skills training. They were also enrolled to Philippine Health Insurance Corp. (PhilHealth). #