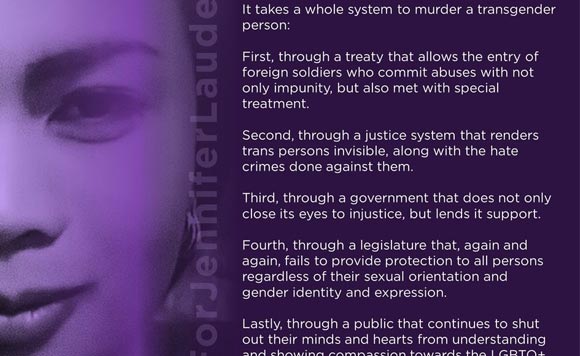 The human rights advocate shared her strong views on the release of Pemberton.

Dinagat Islands Governor Kaka Bag-ao recently released her strong statement following the release of Pemberton, who had been convicted for the 2014 murder of Filipino transgender woman Jennifer. The human rights lawyer strongly condemned the untimely release of the US Marine, and said that the government did not only close its eyes to injustice, but also lent support to it.

“It takes a whole system to murder a transgender person. First, through a treaty that allows the entry of foreign soldiers who commit abuses with not only impunity, but also met with special treatment. Second, through a justice system that renders trans persons invisible, along with the hate crimes done against them”, she wrote.
She further added that the injustice was brought by a legislature that fails to provide protection to all persons regardless of their sexual orientation and gender identity and expression.
She also reiterated that it’s time to break a system that continues to murder our fellow Filipinos and human beings over and over.

“Let us demand justice—for Jennifer Laude and for all trans persons hurt and killed by hate and blindness”, she strongly added.