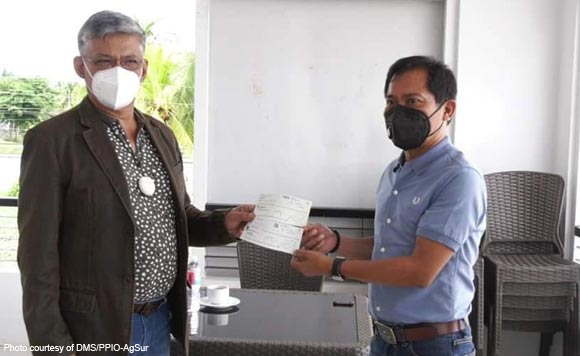 BUTUAN CITY – Agusan del Sur Governor Santiago Cane Jr. handed over a total of P12.8 million worth of infrastructure and development projects to several municipalities and villages in the province this week.

“Gov. Cane wants to continue the implementation of programs and projects unhampered despite the threats of the coronavirus disease (Covid-19) in our province,” Plaza said.

Plaza said the town of Trento received P6 million for the installation of street lights along the town’s main thoroughfares and the concreting of the NRJ-Poblacion-Gasa-Tudela Road in the area.

The funding coming from the general and provincial development funds of the province was received by Trento Mayor Willam Calvez, he said.

Cane also delivered the P3-million funding for the construction of the Municipal Tribal House in the town of San Luis that was received by Mayor Phoebe Corvera.

Plaza said the tribal house is among the primary requests of the indigenous peoples (IPs) in San Luis that would serve as a venue of their meetings and a shelter for tribal members who cannot go home after they visit the town center.

He said Cane also turned over to San Francisco Mayor Solomon Rufila PHP1 million for the construction of the barangay road of Magaud-Maitom and another P1 million for the installation of more street lights in the town.

Two barangays in Sibagat town also received P200,000 each from the provincial government for the construction of the evacuation center phase V and concreting of barangay streets.

A barangay in Sta. Josefa town and another in Veruela town also received P200,000 funds each for road rehabilitation and the construction of slope protection.

“Gov. Cane wants to ensure that despite the pandemic we are facing, the provincial government is working harder to address the other needs of the people of Agusan del Sur,” Plaza said. (PNA)