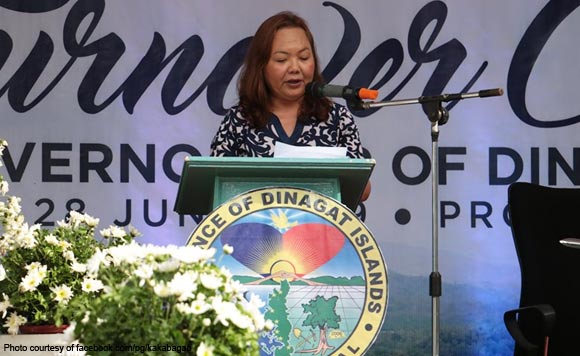 New Dinagat Islands Governor Arlene “Kaka” Bag-ao has urged the other elected provincial officials to put the interests of their constituents as their priority despite coming from various political parties.

Bag-ao, who formally assumed office Sunday noon, June 30, made the call in a speech she delivered during the turnover ceremony of the province from her predecessor former Governor Glenda Ecleo at the Provincial Capitol in San Jose Friday, June 28.

She noted that her vice governor, Nilo Demerey, belongs to the ruling PDP-Laban, while the Fifth Sangguniang Panlalawigan (SP) is “very evenly divided” among the various parties and independents.

“As an advocate and believer of genuine democracy, I view this not as a threat but as a gift and a challenge. As an advocate of political pluralism, I accept this challenge with much respect for our differences and diversity,” she said.

“Let us not deny that we are different. Let us not be threatened that we are diverse. Let us celebrate our differences and diversity for such is the spirit and essence of democracy and pluralism,” the former congresswoman said.

“I will not ask you to put our differences and diversities behind, I am inviting you to put the interests, welfare, and well-being of the people of Dinagat in front,” she stressed.

Bag-ao also thanked Ecleo for what she had done for the province.

Bag-ao ended the reign of the Ecleos in the 12-year old province, which used to be part of Surigao del Norte.