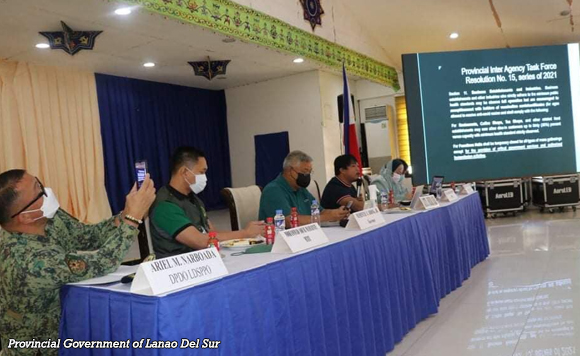 The Lanao del Sur Provincial Inter-Agency-Task Force (PIATF) led by Governor Mamintal “Bombit” Alonto Adiong Jr. has sought the cooperation of the owners of the function halls and restaurants in the province, including Marawi City, for the enforcement of health protocols.

According to Adiong, he had long wanted to talk to them to clarify their concerns regarding the implementation of the minimum health standards.

Joining the governor in the meeting held Friday, October 29, were Police Lt. Col. Ariel Narboada of the Philippine National Police (PNP), Lt.Col. Amrolla Miondas of the Armed Forces of the Philippines (AFP), Atty. Faisal Cali of the Provincial Legal Office, and Board Members Zorab Mangotara, Alicozaman Mangata, Jamil Faisal Adiong, and Shirali Sani, among others.