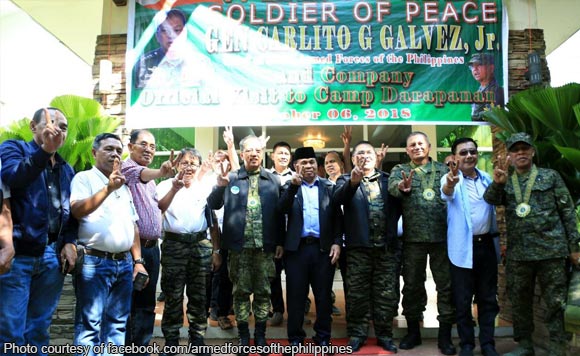 “Today, I came back to one the most revered place, a place I can call home because here lives those galant men I considered my brethren, those whom I had been working with for a peaceful Mindanao,” Galvez said in a statement Sunday.

“It is also to show how we treasure the visit of the AFP Chief-of-Staff in our home.”

Galvez and his party left Darapan at 2 p.m. with the cordon honors still in place.

“This is really an amazing gesture of love which I will always treasure and cherish for my lifetime,” Galvez said of the gesture.

After the visit, Galvez condoled with the family of the agents of the Philippine Drug Enforcement Agency who were killed in Lanao Del Sur on Friday.

He instructed the 6th Infantry Division Commander, Major General Cirilito Sobejana to make sure that all assistance be accorded to the family of the PDEA agents.

“In time of grief, the AFP will always be with PDEA in its fight against illegal drugs. We will do our best to help seek justice for the death of these dedicated gallant agents who died serving the country. With our PNP partner, we will seek justice no matter how long and how hard it will take,” Galvez said. (PNA)