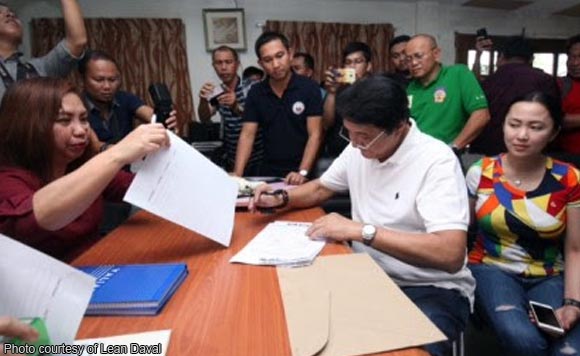 This, however, did not stop Floirendo from seeking another term in the May 2019 elections as he filed his Certificate of Candidacy (CoC) on Thursday afternoon in Tagum City, Davao del Norte.

Floirendo will be running under the banner of the Hugpong ng Pagbabago (HNP), the regional party formed by Davao City Mayor Sara Duterte along with the four governors of Davao region.

Floirendo was joined by five aspirants for the provincial board and incumbent Davao del Norte Gov. Anthony del Rosario, who is set to file his CoC with the full slate of HNP next week.

“Pag congressman ka siyempre tinitingnan mo yung distrito mo (Of course if you are a congressman you look after your district). You make sure the delivery of services,” Floirendo said, explaining his reelection bid.

He said he also wants to continue helping President Rodrigo Duterte and the administration.

Before filing his CoC, Floirendo met with his supporters at a local restaurant in Panabo City.

Floirendo did not discount last minute changes in the HNP’s lineup. He said he is also open to run for vice governor if HNP party is having a hard time looking for a candidate.

If that happens, he said he will ask his daughter Gabby to run for Congress.

On the other hand, Alvarez is reportedly seeking a reelection under the Partido ng Demokratikong Pilipino-Lakas ng Bayan (PDP-Laban).

He will also be fielding his chief of staff, Edwin Jubahib, for governor, and former Tagum City Mayor Rey Uy for vice governor.

Alvarez will be challenged by a farmer from Asuncion town, Ronelo Rafales, who filed his CoC for the first district congressional seat Thursday.

Claiming to be endorsed by President Rodrigo Duterte, Rafales said he relies on the votes of the farmers to win the election. (Lilian C Mellejor/PNA)