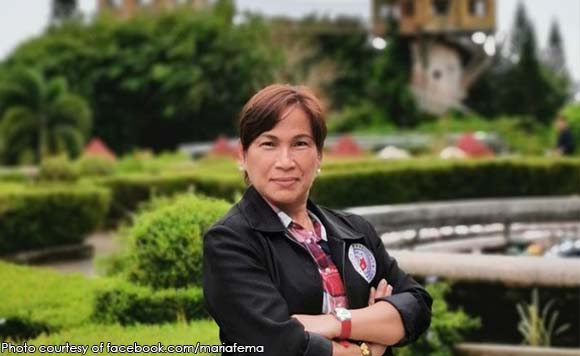 0 406
Share
Want more POLITIKO News? Get the latest newsfeed here. We publish dozens and dozens of politics-only news stories every hour. Click here to get to know more about your politiko - from trivial to crucial. it's our commitment to tell their stories. We follow your favorite POLITIKO like they are rockstars. If you are the politiko, always remember, your side is always our story. Read more. Find out more. Get the latest news here before it spreads on social media. Follow and bookmark this link. https://goo.gl/SvY8Kr

The Presidential relative has unleashed new tirades against the journalist.

Former Nayong Pilipino executive director Fema Duterte recently shared her thoughts on administration critic Maria Ressa. On her Facebook, the Politiko called the journalist an “idiot” for saying that reporting in the Philippines is worse than any war zone.

“Ma’am, are there bombs dropping around you? Do you have any rationing of food, water, electricity or other commodities?”,

She also asked Ms. Ressa to stop “spreading fake news aimed at discrediting this administration”, further claiming that a vast majority of the Filipino people say they feel much safer.

Ms. Ressa is the head of Rappler news site, and had been arrested and charged with libel and tax evasion. She was interviewed by CBS News where we made the remarks discussed by Ms. Duterte.

This idiot Maria Ressa claims that reporting from the Philippines is worse than any war zone!!!Ma’am, are there bombs…

Throwback: Check out the Duterte family, nineteen years ago