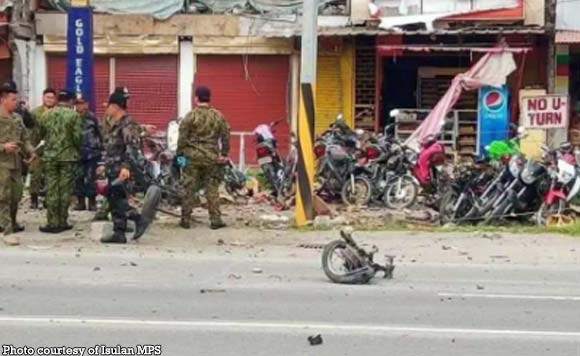 0 124
Share
Want more POLITIKO News? Get the latest newsfeed here. We publish dozens and dozens of politics-only news stories every hour. Click here to get to know more about your politiko - from trivial to crucial. it's our commitment to tell their stories. We follow your favorite POLITIKO like they are rockstars. If you are the politiko, always remember, your side is always our story. Read more. Find out more. Get the latest news here before it spreads on social media. Follow and bookmark this link. https://goo.gl/SvY8Kr

ISULAN, Sultan Kudarat — Extortion is being eyed as motive behind Saturday’s bombing in front of the public market here that left seven persons injured, including a traffic enforcer and an off-duty militiaman.

This, he said as the number of persons injured in the incident rose to eight from an initial report of four blast victims.

“Possible motive is extortion but we are not discounting possible involvement of extremists, we are still investigating,” Bagaybay said.

Prior to the incident, he said Mayor Marites Pallasigue received an extortion demand through her mobile phone purportedly from an extortion group.

Bagaybay said the group threatened the local government that bombings will happen if their demand of PHP250,000 a month protection money is ignored.

He said the extortionists also called the mayor on Sept. 2 and asked for money, telling the mayor that a bomb will explode if their demand was ignored.

“They are demanding PHP250, 000 a month from the Isulan town government,” Bagaybay said.

Bagaybay also said the police is now in possession of closed-circuit television (CCTV) footages of the city government security cameras in front of the town market.

Bagaybay said the perceived bomber was a man disguised as a woman with a wig, shoulder bag, and white loose shorts.

Police are reviewing the CCTV to have clearer view to determining the bomber’s identity.

An Army intelligence officer, who asked not to be identified, said the explosive device that went off Saturday was similar to other improvised bombs that were previously set off in Isulan.

In April this year, 18 persons were hurt when a man set off an anti-personnel mine in front of a restaurant located in the same stretch of the national highway.

Isulan is the provincial capital of Sultan Kudarat. (With reports from Noel Punzalan/PNA)