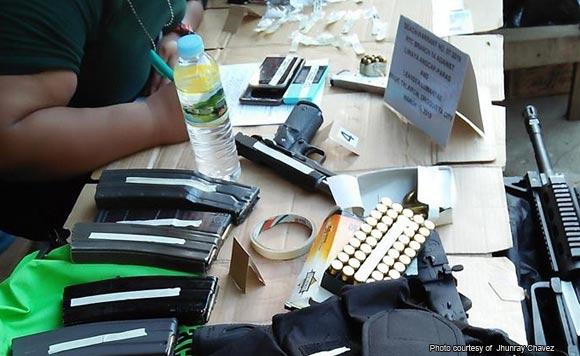 Liwaya Angcap, former mayor of Midsalip town and her common-law partner, Leander Lumantas, were arrested after a search based on a warrant was conducted in their store and residence in Barangay Talairon, this city.

Wilkins Villaneuva, PDEA-10 regional director, said Liwaya was the daughter of incumbent Mayor Leonida Angcap of Midsalip town, Zamboanga del Sur, who was among the officials on the narcolist released by President Rodrigo Duterte in Davao City on Thursday evening.

Villanueva said Liwaya was a member of the Kubal Drug Group under Ardot Parojinog, which is operating in this province, and listed as a high-value target for alleged illegal drug activities.

Liwaya is also a cousin of Mary Ann Angcap, a barangay chairman of Labuyo in Tangub City who was arrested in 2017 and convicted the following year for illegal drugs.

Villanueva said they have been monitoring Liwaya for a month and that she “does not sell to small users but supply drugs to sellers.”

Earlier, incumbent Mayor Leonida Angcap of Midsalip, Zamboanga del Sur, vehemently denied connection with illegal drugs activities. The elder Angcap said she was not mentioned by President Rodrigo Duterte in the conference but was shocked after knowing her name was included in the distributed narcolist.

Leonida said she strongly supported the President’s anti-illegal drug campaign and even jailed a few of her close acquaintances.

Leonida admitted that the Parojinog couple — Ardot and his wife –attended a barrio fiesta with acquaintances in her town and met with her to talk with the latter’s plan for a mining application in Midsalip. (PNA)

North Cotabato placed under state of calamity due to El Niño