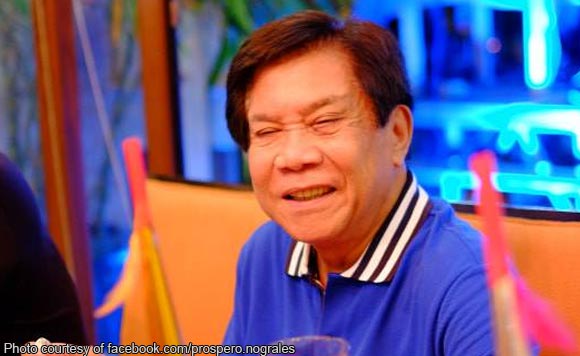 ‎Former House Speaker Prospero ‎Nograles will file a motion for reconsideration to reverse the decision of the Office of the Ombudsman to file charges against him in the Misamis Oriental Priority Development Assistance Fund (PDAF) scam.

Nograles said the cases against him were all based on spurious documents and mismatched timelines.

“I have not received a copy of the decision of the Ombudsman but nonetheless we are preparing our motion for reconsideration hoping that the body would go the extra mile to study the authenticity of their documents. We still have a lot of legal remedies but we are also ready to fight this all-out before the Sandiganbayan. The Ombudsman is losing a lot of cases because they seem to lack the patience and the diligence to study their cases,” the politiko said.

Nograles is set to face trial for three counts of violation of Section 3(e) of the Anti-Graft and Corrupt Practices Act (Republic Act No. 3019), one count of malversation and two counts of malversation thru falsification of public documents.

“These allegations are obviously without basis. The documents that they are using as evidence are fake and their narratives don’t even match vis-a-vis their timelines. This resolution is based on wrong premises,” the former House Speaker added.

Noting that he cannot speak for and in behalf of the other personalities who were subjects of the charges filed before the Sandiganbayan, Nograles said that as far as he is concerned, he did not receive or facilitate the release of any PDAF fund for the 1st District of Misamis Oriental while he was acting as caretaker congressman.

The politiko became the caretaker representative for the first district of Misamis Oriental following the demise of Congressman Danilo Lagbas but pointed out that even as such, he exercised no administrative control over the day-to-today operation of this office.
‎
He said that the documents presented as evidence to prove his involvement in the alleged PDAF anomalies all contained spurious signatures but the Ombudsman did not even bother to get any expert opinion on the authenticity of their evidence.

For one, the Ombudsman failed to appreciate a lot of material facts such as the SARO which was attributed to him was dated while Congressman Lagbas was still alive.

Other documents used by the Ombudsman as basis were supposedly signed by Nograles despite the fact that he was actually in Saudi Arabia for a diplomatic mission.

“How can one be in two places at the same time? I was in Saudi Arabia and I have all the documents including photos to prove this when the Ombudsman claimed that I signed the allegedly anomalous PDAF documents,” Nograles said.

The politiko added that whoever is behind the bid to pin him down should stop because he has long retired from politics and is no longer interested in any government position.

“I’m retired and I’m happy taking care of my wife, my grandchildren and my dogs so leave me alone. Any true legal mind would agree that the cases filed by the Ombudsman are without basis in fact and in law,” Nograles said.

She put her military hat on for a day’s session.

How to be you: Chedz Alvarez meets Maxine Medina during House plenary