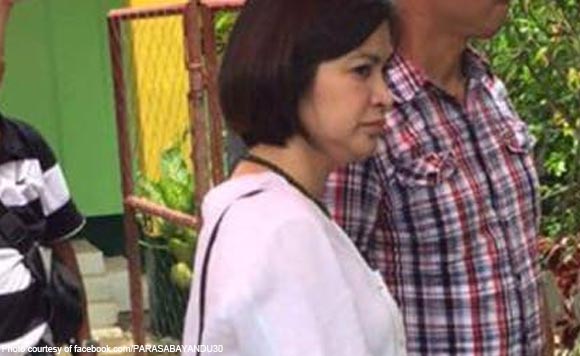 In a 22-page “vehement opposition” released Wednesday, Echavez’s lawyers asked the court not to grant her transfer from the Philippine National Police Custodial Center (PNPCC) in Camp Crame to the Bicutan jail.

“Evidently, she was detained in the PNPCC when she was first arrested. Simply put, she was considered as a high-value target and a high-risk detainee and to date, her circumstances have not changed from the time she was arrested,” the document read.

Last week, state prosecutors led by Senior Assistant State Prosecutor Juan Pedro Navera said Echavez’s “continued detention at the PNPCC affords her special treatment as she is subjected to a different set of rules and procedures not afforded to all other detainees under the BJMP control”.

In the memorandum dated Nov. 14, 2019, Basngi sought assistance from the CIDG to request for the transfer of Parojinog to the facility in Taguig.

The continued practice of committing prisoners, the prosecutors said, is “unduly burdensome on the part of the PNP because of the financial and manpower requirement it entails ” since it was not meant to be a long-term jail facility which can house a number of prisoners like the facilities of the BJMP.

Echavez is facing illegal drugs and firearms possession charges in connection with a raid by the police on July 30, 2017, against her, her father, former city mayor Reynaldo Parojinog Sr., and uncle, councilor Ricardo “Ardot” Parojinog, for reportedly storing guns in their houses.

The operation resulted in the death of 15 persons, including Parojinog
Sr., and his wife. (PNA)

Mayor Climaco toughens up on spitting in public in Zamboanga