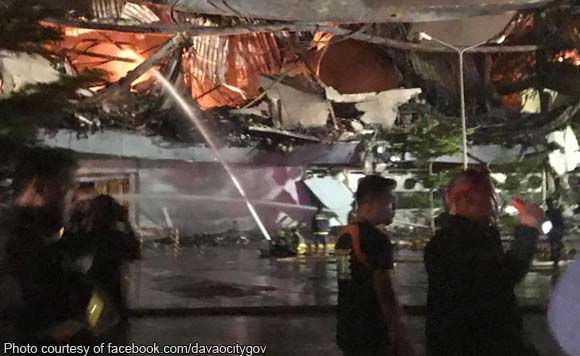 Davao City Mayor Sara Duterte-Carpio backed off from direct involvement in the ongoing investigation of the fire that razed down the homegrown New City Commercial Center (NCCC) after some people questioned her integrity and impartiality.

“I don’t want to talk about the investigation,” the city mayor told reporters in a press briefing Friday at City Hall. The mayor is also going on leave from December 30 to January 1 to attend to her children.

Duterte-Carpio has backed off from her earlier offer to include the city government representation in the special multi-agency task force investigating the mall fire incident.

She said some people have questioned her integrity and impartiality on the NCCC Mall investigation given her commitment as an endorser of Choice Mart, another brand of the NCCC supermarket. There was a suggestion for her to inhibit from the investigation.

“For the record, I am not part of the investigation team. I have never presented myself to investigate the mall fire and under normal circumstances, a City Mayor does not sign fire investigation reports of the BFP,” Duterte-Carpio earlier said in a press statement.

“Nobody can question how I did my work as Mayor in helping the family of the victims, the BFP (Bureau of Fire Protection, the NCCC, and SSI (Survey Sampling International) officials,” the mayor quipped.

Duterte-Carpio pointed out that the staff and the City Social Services and Development Office (CSSDO) handled everything during the evening of December 23 to the present prevented chaos and hysteria among the victims and Dabawenyos in general.

But the mayor assured of the city’s cooperation. The city’s Central 911 and the City Engineer’s Office (CEO) will be on hand to give information on the city’s response operation and building plans of the NCCC should the national government’s investigation team need them.

The special multi-agency task force composed of the Department of Interior and Local Government (DILG) as the lead agency, the BFP national office, Scene of the Crime Operatives (SOCO), the Philippine National Police (PNP) has already started its investigation into the incident and already visited the site on Thursday.

DILG Assistant Secretary for Public Safety Nestor Quinsay said he expected to complete the probe in two to three weeks.

A third-party investigator is still expected as offered by Duterte-Carpio. This will be recommended by the families of the victims but professional fees will be covered by the city government. (Lilian C. Mellejor/PNA)