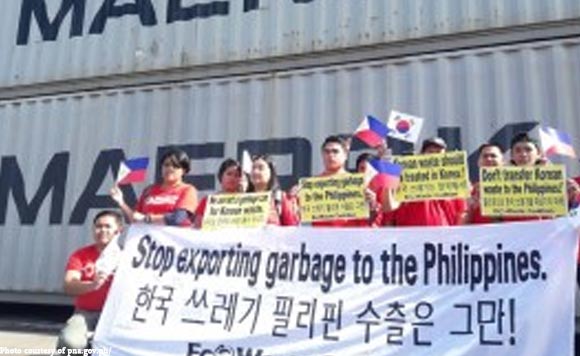 CAGAYAN DE ORO CITY–Environmental group EcoWaste Coalition has welcomed the agreement reached by the governments of the Philippines and South Korea for the repatriation of 5,177 tons of wastes.

In a statement Saturday, EcoWaste National Coordinator Aileen Lucero lauded the firm stand of Customs and Environmental officials in Northern Mindanao to have the wastes shipped back despite South Korea’s proposal to incinerate the wastes in a landfill in the Philippines.

“We laud the firm stance of customs and environmental officials in the region to have the illegal traffic waste re-exported to its source in South Korea,” Lucero said.

“We also laud them for rejecting outright the proposal from the Korean side to landfill or incinerate the illegal traffic waste from South Korea in the Philippines,” she added.

At the June 13 meeting in Tagoloan, Misamis Oriental, officials from both countries agreed to ship the wastes on June 30. The waste cargoes, falsely declared as “plastic synthetic flakes” with a total combined weight of 6,500 tons, arrived in Northern Mindanao in July and October 2018.

Chaired by Port Collector John Simon, the meeting drew over 40 attendees led by Rep. Juliette Uy of the 2nd District of Misamis Oriental, and included observers from the private sector and the civil society.

Under the Basel Convention, the obligation of the State of export to manage the illegal traffic waste “in an environmentally sound manner may not under any circumstances be transferred to the State of import or transit.”

The South Korean government’s representatives were led by Director General of the Ministry of EnvironmentYoung –Dae Jung.

To recall, the wastes that local authorities later determined as “misdeclared, heterogenous and injurious to public health,” have been sitting at the premises of Verde Soko Philippines Industrial Corp., the consignee, inside the PHIVIDEC Industrial Estate in Sitio Buguac, Barangay Santa Cruz, Tagoloan since July 2018.

The first batch of the illegal waste shipment consisting of nearly 1,400 tons of containerized wastes was re-exported to South Korea on January 13 this year. (PNA)