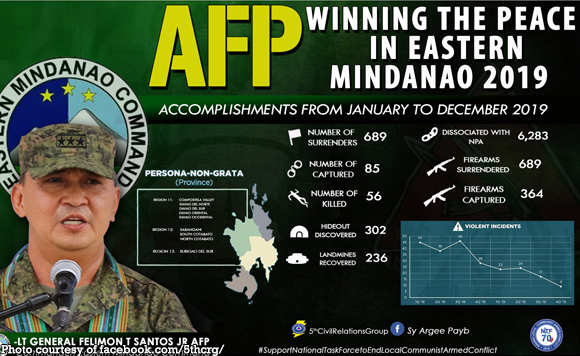 The military’s Eastern Mindanao Command (Eastmincom) has recorded a downward trend in the number of atrocities with the communist New People’s Army (NPA).

“This is attributed to the surrender of 696 regular NPA members, the arrest of 85, and the death of 56 others during encounters,” it said.

The reduction in rebels’ firearms was also a big factor, military said, citing that for 2019, a total of 689 firearms were surrendered, while 364 were captured during encounters.

It also cited the continuous loss of mass base and space, with 6,283 mass supporters and members of the underground mass organization dissociating themselves and severing their ties with the Maoist group.

An overwhelming number of local government units – nine provinces, four cities, 46 municipalities, and 24 organizations in the whole area of the Eastmincom–declared the Communist Party of the Philippines-NPA-National Democratic Front (CPP-NPA-NDF) as persona non grata, forcing the latter to be mobile and to consolidate in the political boundaries of the provinces, it added.

“Sadly, there were 17 soldiers, 15 CAFGU active auxiliaries, and three PNP (Philippine National Police) members who paid the ultimate sacrifice in the pursuit of peace in the Eastmincom area,” military said.

With the improved security situation, Eastmincom said it expects a faster delivery of services in Geographically Isolated and Disadvantaged Areas (GIDAs) and former conflict-affected areas.

It also noted the effective implementation of Executive Order No. 70 or the Whole-of-Nation Approach to End Local Communist Armed Conflict (ELCAC) that addresses the non-military dimensions of insurgency which is being operationalize at all levels by the different LGUs in the Command’s area of responsibility.