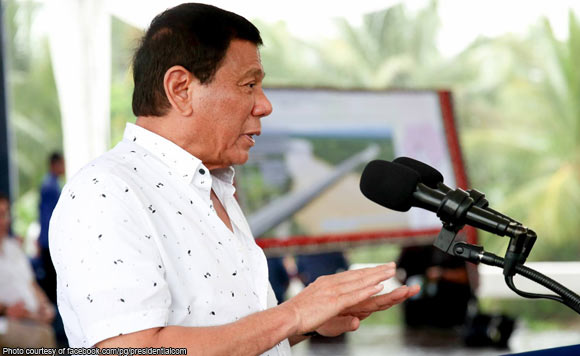 The President arrived in Barangay Los Amigos for the groundbreaking of the Biyaya ng Pagbabago Housing project organized through the joint effort of the National Housing Authority, San Miguel Corp., Pilipinong May Puso Foundation and the city government of Davao.

The project is expected to be completed in March next year and is intended for informal settlers relocated from danger areas.

In his message, the President thanked those who contributed their effort and resources to realize the project, particularly Ramon Ang of San Miguel Corp.

Out of the 8.76 hectares, the total land area for development is 6.15 hectares, which is owned by the city government. This could accommodate a total of 908 residential units and two commercial lots. Gawad Kalinga will also build one-story housing units on the area categorized as social lots.

Duterte also attended the groundbreaking ceremony and launching of the AFP and PNP’s new housing design and modalities of Madayaw residences.

Located in Barangay Talomo in Davao City, the housing project for soldiers and policemen will be built on a 2.9 hectare land owned by the NHA.

Under the project, 16 structures with five-storey low rise buildings will be built using two different models. A total of 860 housing units will be constructed under the project.