Duterte to Romualdos of Camiguin: You do not belong in politics 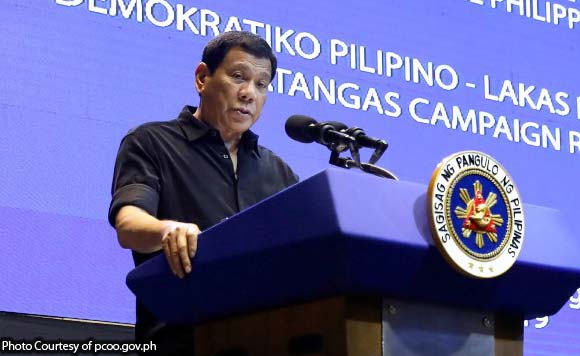 President Rodrigo Duterte hit again the Romualdo clan in Camiguin, saying it should be out of politics.

During the miting de avance of PDP-Laban in Pasig City Saturday, May 11, Duterte recalled how he was treated by the Romualdos when he campaigned for president in 2016.

He said that when he was campaigning in Camiguin, the power supply was cut off.

“Mga ganoon na klaseng politiko. Bastos ‘yun. You do not belong in politics,” he added.

The President even threatened to embarrass the Romualdos before their constituents.

“Do you want me to embarrass you before your constituents? Just let me know because I will do it. Puntahan kita diyan mag-isa ako. Samahin kita sa impyerno,” he said.

Former Governor Jurdin Jesus Romualdo is running for the same position to be vacated by his wife, Ma. Luisa. Three other members of the Romualdo clan are seeking other posts in the province.