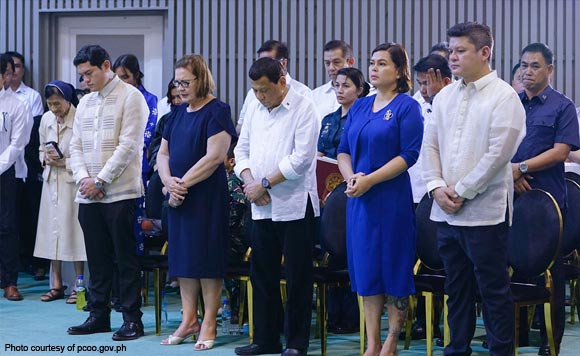 DAVAO CITY — President Rodrigo R. Duterte has advised his children to stay humble and not to flaunt the power given to them by the people as he thanked Dabawenyos for their continued trust and confidence in the Dutertes’ capability to bring progress to the city.

“I am at a loss for words to characterize our presence here this afternoon. Akong mga anak ug ako. In terms of politics og ang gugma sa mga tawo nagpabilin sa among pamilya (My children and me. In terms of politics and the people’s love for my family remains),” the President said during the oath-taking of his younger son, Sebastian “Baste” Duterte, as the city’s vice mayor at the Session Hall of the Sangguniang Panlungsod (City Council) on Friday.

Duterte said he could not ask for more after the Dabawenyos gave them an overwhelming mandate. Sara, Paolo, and Sebastian were unopposed during the May 13 elections.

The President also reminded his children and the youth that for “as long as we do not have a clean government, for as long as corruption is there, and for as long as there is no law and order… we cannot hope to rise.”

Since it was Sebastian’s first crack at governance, the President said his youngest son should read the rules of parliament.

“What you cannot learn is the temperament of each and every councilor,” he said.

In his speech, Duterte recalled how members of his family rose to power, starting from his father, the late governor of a then undivided Davao, Vicente Duterte, who held office in the same site of the new Sangguniang Panlungsod building. This is the same building where the old fiscal’s office was located and where President Duterte used to hold office as fiscal before he became OIC-vice mayor after the Edsa people power revolution.

The President also recalled how Davao City transformed into a progressive city from the days when he was fiscal when he handled drug cases until he was elected mayor of the city in 1988.

Duterte said he backed the political plans of his children but noted that they should give others a chance to lead.

Duterte said time would come when he would tell his children to give others a chance.

“The political power of the city was or (is) in the hands of the Duterte family, starting in ’88. But if you think, Dabawenyos, that they (Sara, Paolo, and Sebastian) are not already up to it, then by all means, I suggest other leaders here to put up a strong opposition,” he said.

“(This is) so that the people will have a choice na hindi lang ang Duterte pala ang marunong. I encourage you to do that because this is a democracy,” the President said. (PNA)

P43K worth of illegal logs confiscated in Surigao del Sur