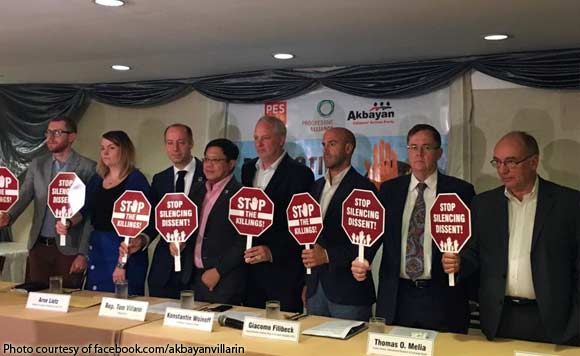 President Rodrigo Duterte called a visiting group of European parliamentarians, the self-styled “Progressive Alliance” as a bunch of idiots who were either retirees or jobless in their home countries.

“Look, idiot. I am smarter than you. Otherwise you are now the Prime Minister of your country,” said Duterte in an interview on state-run PTV-4.

“The fact is that you are just a member of an NGO (non-government organization), earning your keep maybe because you are already retired or you do not have a job in your homeland,” he added.

Duterte chided the Euro parliamentarians as “ignoromuses” for not knowing the nuances of the term extra judicial killings term in each country setting and what would it take to remove the Philippines from the United Nations roster due to its alleged human rights abuses.

“I dare you (delist us from UN). Otherwise, I will call you an ignoramus. Go ahead so that the people will know how stupid you are. Pag hindi mo magawa, huwag ka nang pumunta dito. I’ll slap you if I see you. Why? Because I do not like ignorant visitors,” he said.

Duterte said he was leaning on his “bright” Ambassador to the UN Teddy Boy Locsin to parry any efforts to expel the country from the UN membership.

“What is really very important for you to know, you ignoramus, if you are still around, that issue will reach the Security Council because Russia and China would always ask what is that issue all about. You can be sure China and Russia, the big five there who have permanent seats in the Security Council, they will always put you down,” said Duterte.

How can you expel us? For the life of me and for your education, how can you expel us? The two permanent countries there that are on the Philippines’ side are China and Russia. So huwag mo kaming iwanan dito na takot na hindi mo naman kaya,” he added.

Duterte to recruit millennials to replace aging soldiers, police: I want 18- to 19-year olds to fight our wars