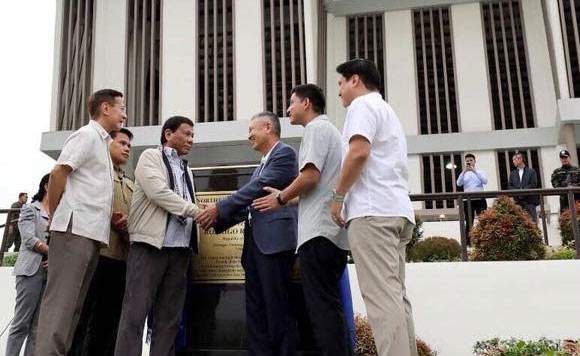 0 506
Share
Want more POLITIKO News? Get the latest newsfeed here. We publish dozens and dozens of politics-only news stories every hour. Click here to get to know more about your politiko - from trivial to crucial. it's our commitment to tell their stories. We follow your favorite POLITIKO like they are rockstars. If you are the politiko, always remember, your side is always our story. Read more. Find out more. Get the latest news here before it spreads on social media. Follow and bookmark this link. https://goo.gl/SvY8Kr

President Rodrigo Duterte said it was good thing that he still left other drug suspects alive so that there would be a “few” who could still use the newly-inaugurated drug rehabilitation facility in Malaybalay, Bukidnon.

“Mabuti nalang may — it’s a good thing there is a… I don’t know if — don’t kill them all. Leave a few so that they will live here,” said Duterte during his speech Friday in Malaybalay where he led the unveiling of the Northern Mindanao Wellness and Reintegration Center (NMWRC).

The P500-million NMWRC is the largest treatment and rehabilitation facility for victims of illegal drugs in Mindanao.

“If they are all killed, then there’s nothing. We’ll turn this (facility) into a very large funeral parlor instead,” Duterte said.

The NMWRC, donated by the Friends of the Philippines Foundation, can accommodate around 600 patients on a 6-month treatment cycle.