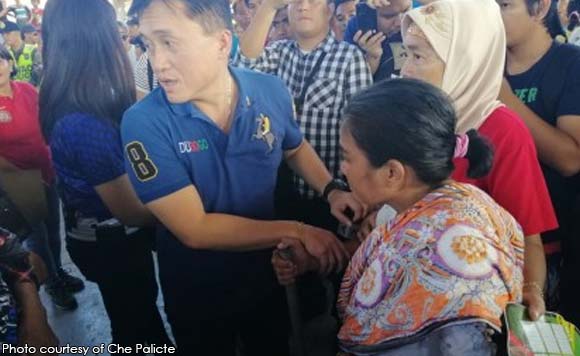 0 187
Share
Want more POLITIKO News? Get the latest newsfeed here. We publish dozens and dozens of politics-only news stories every hour. Click here to get to know more about your politiko - from trivial to crucial. it's our commitment to tell their stories. We follow your favorite POLITIKO like they are rockstars. If you are the politiko, always remember, your side is always our story. Read more. Find out more. Get the latest news here before it spreads on social media. Follow and bookmark this link. https://goo.gl/SvY8Kr

“I cannot speak in behalf of the President, but he is concerned that the terrorists might run and hide here in Mindanao,” he said.

Mayor Sara Duterte announced during the 5th Davao Investment Conference (ICon) in June her intention to ask for the lifting of martial law following her dialogue with ambassadors and officials of other countries who attended the event.

Go, who visited fire and monsoon wave victims here, said he supported
the stand of Mayor Sara, knowing that this city is a very peaceful
place to live in.

However, he said the decision whether to lift martial law here was still in the hands of the President based on the recommendation of the military, intelligence authorities, and the Department of National Defense.

“As a Dabawenyo, I witness how peaceful the city is but I also understand the position of the national government on this issue,” said Go.

Go said the military presence in Mindanao was meant to not only protect the island from terrorists but also to deter them from coming in.

“The good thing is that, our military was not involved in any abuse and the Mindanaoans know that,” he stressed.

President Duterte declared martial law in the entire Mindanao on May 23, 2017 amid the siege of Marawi City by Islamic State-inspired terrorists. (PNA)

‘House of Peace’ inaugurated in Basilan