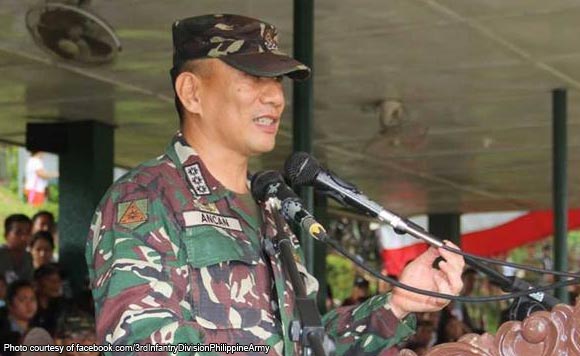 President Duterte donned the rank of Major General to Ancan after the chief executive led the commemoration Wednesday of the 121st Independence Day at the headquarters of the Army’s 6th Infantry Battalion in Malabang town, Lanao del Sur.

“I am very much privileged and honored because no less than our Commander-in-Chief donned the second star rank that I’ve earned in my military career,” said Ancan in a statement Thursday.

“Rest assured that I will continue to serve the constituents in our area of responsibility and lead our troops in the accomplishment of our mission,” he added.

Ancan is the 45th among the lineage of noble officers to lead the Army’s 1st Infantry “Tabak” Division. He hails from Victorias, Negros Occidental and is a member of the Philippine Military Academy (PMA) “Hinirang” Class of 1987.

He led the Army’s 1002nd Infantry Brigade based in Malungon, Sarangani before he was assigned on February 7, this year, as the commander of the 1st Infantry Division.

He is a recipient of a long list of rightfully earned awards and commendations, the highest of which is the Distinguished Service Star that sets the bar high for all “Tabak” troopers to emulate.