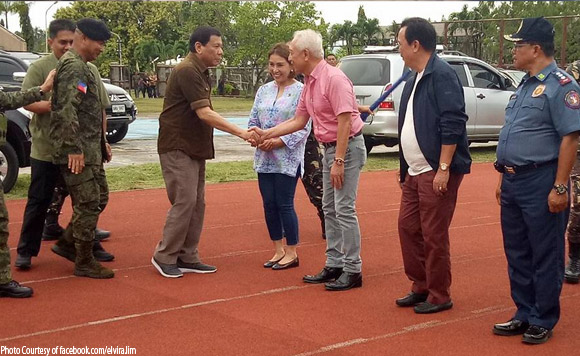 “I’m sure we still have some money to spare and supplies to share with you,” President Duterte told local government officials during the National Disaster Risk Reduction and Management Council (NDRRMC) briefing held in Tubod, Lanao del Norte.

Duterte said his administration would try to “fast- track everything” in order to meet the needs of the typhoon victims adding that he has already instructed concerned department heads to do their job.

“It’s in the departments concerned and I will just order them to come here and do their thing, in whatever aspect they are supposed to deal with,” he said.

The Chief Executive likewise assured the local officials that he would convene a Cabinet meeting to determine what is needed for the province’s quick return to normalcy.

Among the concerns raised by Lanao del Norte mayors include severe damage to major infrastructure such as bridges, farm-to-market roads, irrigation system and government vehicles.

The President then tasked different government agencies and support groups to help in the restoration and recovery such as the Philippine Air Force and the Department of Public Works and Highways (DPWH).

“Magtulungan na lang tayo. We will provide the equipment. I hope they are nearby so that they can be transported here. So they can come here and do the job immediately,” he said.

Duterte tasked Agriculture Undersecretary Bernadette Romulo Puyat, who was present during the briefing, to address the matter.

“That’s why I’m here, part of my job. We are all workers of government and we will see to it that ‘yung ipinangako namin dito matupad kaagad,” he said.

The President also extended his condolences to the families of those who died due to the typhoon’s wrath. He promised to continue the search and retrieval operations for those who are still missing.

While lamenting the disasters the country have experienced this year, the President remains optimistic for “a new beginning” come 2018.

Following the briefing, the President answered several queries from the media in a brief interview where he committed to visit other places damaged by the typhoon.

He said he would also visit Marawi probably during the weekend after he cancelled his scheduled trip to Lanao del Sur due to bad weather.

The President was supposed to lead the turnover of some 500 temporary shelters in Barangay Sagonsongan to families affected by the five-month-long armed conflict in the Islamic city. (PND)