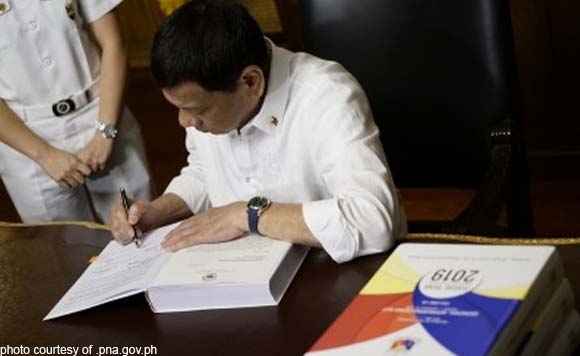 0 121
Share
Want more POLITIKO News? Get the latest newsfeed here. We publish dozens and dozens of politics-only news stories every hour. Click here to get to know more about your politiko - from trivial to crucial. it's our commitment to tell their stories. We follow your favorite POLITIKO like they are rockstars. If you are the politiko, always remember, your side is always our story. Read more. Find out more. Get the latest news here before it spreads on social media. Follow and bookmark this link. https://goo.gl/SvY8Kr

Republic Act No. 11455, which Duterte inked on Aug. 30, 2019, said one branch would be stationed in the Municipality of Isulan and the other one at Tacurong City.

“The Supreme Court shall assign the branch number of the newly created Regional Trial Court branches in the Twelfth Judicial Region,” the new law read.

The funds necessary for the operation of the new RTC branches shall be appropriated and released only upon the actual organization of the courts and the appointment of their personnel, it added.

The Act shall take effect 15 days after its complete publication in the Official Gazette or in two newspapers of general circulation.