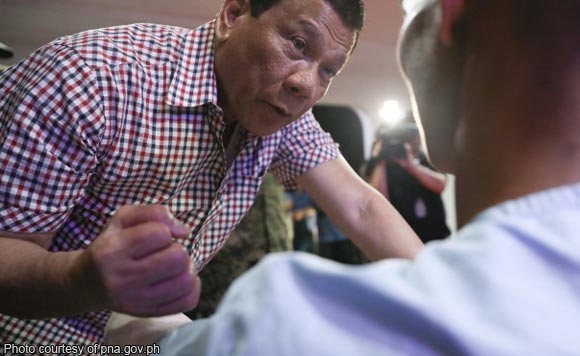 President Rodrigo R. Duterte has met with families of the soldiers killed in two Sulu tragedies — the twin bomb blasts in Jolo on January 27 and the encounter with Abu Sayyaf bandits in Patikul on February 2.

Presidential Spokesperson Salvador Panelo said the private meeting with the families of the six soldiers killed in Jolo and Patikul took place at the Matina Enclaves, Davao City.

Panelo noted that Duterte offered sympathies to the soldiers’ families, honored their heroism, and assured them of assistance on Monday.

“The President condoled with the bereaved families and honored the fallen soldiers for their heroism by awarding them the Order of Lapu Lapu (rank of Kalasag),” Panelo said in a statement.

“He comforted the grieving families and assured them of the government’s assistance in terms of housing, livelihood, employment and educational assistance, among others,” he added.

The twin bomb attacks at the Our Lady of Mount Carmel Cathedral in Jolo, Sulu killed 22 people and injured more than 90 others on January 27.

Meanwhile, eight people were killed, including three Abu Sayyaf bandits, while 33 others were wounded in a firefight in Patikul, Sulu on February 2.

The encounter took place after Duterte, on January 29, ordered troops to pursue Abu Sayyaf bandits, convinced that they were behind the twin blasts.

“We are sure of that. Nobody can perpetuate that kind of terrorism thereabout (in the area). I have no doubt,” Duterte said in a chance interview after the groundbreaking of the new site of the San Lorenzo Ruiz General Hospital in Malabon City.