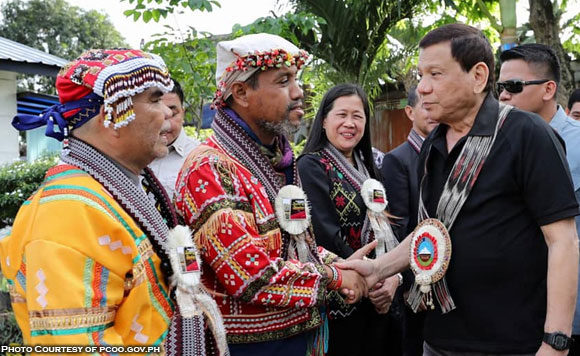 President Rodrigo Duterte will release P100 million to tribal communities in Mindanao for livelihood program and agricultural development as well as to counter the influence of communist insurgents.

Speaking before the leaders of tribal communities in Davao City on Thursday, February 1, Duterte promised to facilitate the entry of investors and government assistance to tribal areas for them to develop and secure sustainable livelihood.

“Mag-release ako ng 100 million, temporary, pangtawid ninyo sa normalcy. ‘Yun ang gamitin ninyo,” he said. “You have to learn something, a skill to help your family,” he added.

He also underscored the importance of education to lift Lumad communities from dire poverty promising to provide free education to bright and talented young indigenous people.

The President also expressed his government’s willingness to fund the education of brilliant young tribe members by sending them to top universities in the country.

“I will send your children to any good school, or if you’re in Manila and you want to send them to San Beda, Ateneo, La Salle, you may enroll them there and the government will pay for the tuition fee,” he said in the vernacular.

To fend off the influence of communist insurgents in Lumad areas, Duterte announced that his government would recruit qualified tribe people to become members of the Armed Forces.

Duterte added that he would personally protect the ancestral domains in the country under his administration and choose investors to develop the areas.

The IP Leaders’ Summit is a two-day event which aims to provide the IPs with an avenue to air their concerns with the national government agencies. It has drawn IP and Lumad leaders from Eastern Mindanao.

In a manifesto issued during the summit, the tribal leaders said:

“We strongly express our continued support to President Rodrigo Duterte, whom we believe will help us shape and achieve our destiny as United Indigenous Peoples Mindanao in our respective ancestral domains.”

Attendees of the summit were customary leaders, elders and representatives of IPs from Mindanao comprising Regions 10, 11, 12 and 13. They stood to strengthen and push for self-determination in accordance with their customary laws, indigenous cultures and traditions.

The summit is the first meeting with tribal leaders under the Duterte government and also the first for President Duterte to meet Lumad leaders from Eastern Mindanao. (PNA)