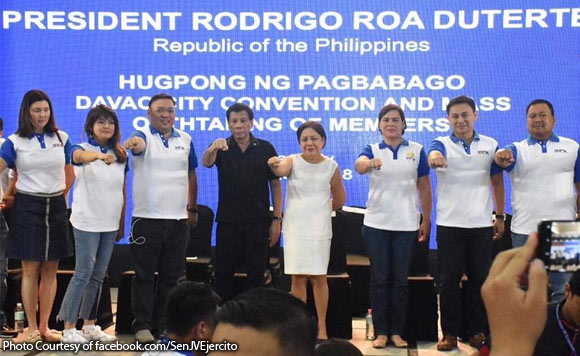 0 637
Share
Want more POLITIKO News? Get the latest newsfeed here. We publish dozens and dozens of politics-only news stories every hour. Click here to get to know more about your politiko - from trivial to crucial. it's our commitment to tell their stories. We follow your favorite POLITIKO like they are rockstars. If you are the politiko, always remember, your side is always our story. Read more. Find out more. Get the latest news here before it spreads on social media. Follow and bookmark this link. https://goo.gl/SvY8Kr

Over 6,000 individuals pledged support to the party during a ceremony held at the SMX Convention Center in Davao City.

Some national figures believed to be running for the Senate next year and who got the support of HNP were also present in the event. Among them were Special Assistant to the President Christopher “Bong” Go, who also took his oath as HNP member, Presidential Spokesperson Harry Roque, Bureau of Corrections chief Ronald dela Rosa, Taguig City Rep. Pia Cayetano, and Ilocos Norte Gov. Imee Marcos.