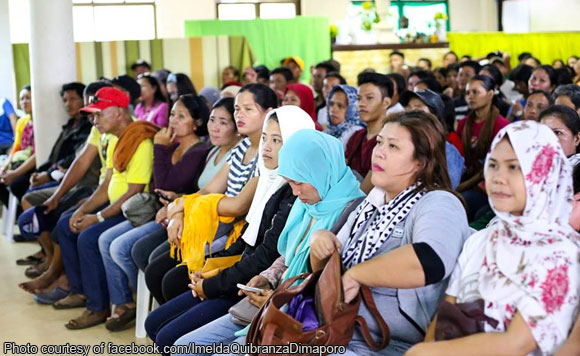 Some 553 residents of Lanao del Norte benefited from the emergency employment program of the Department of Labor and Employment (DOLE).

Provincial Governor Imelda ‘Angging’ Quibranza-Dimaporo, who led the closing program of “Tulong Panghanapbuhay sa Ating Disadvantaged/Displaced Workers or TUPAD” on May 2, commended DOLE for its program.

She also thanked Senator Sonny Angara for assisting in the project.

TUPAD is a community-based package of assistance that provides emergency employment for displaced workers, underemployed and seasonal workers for a minimum period of 10 days, but not to exceed 30 days, depending on the nature of work to be performed.

DOLE gave priority to workers who were laid off or terminated as a result of permanent closure of an establishment and those who were self-employed and have lost their livelihoods (including farmers and fishermen) because of natural or man-made disasters.

Before the beneficiaries started with their work, they underwent basic orientation on safety and health and provided with personal protective equipment in the form of T-shirt and hat.

The beneficiaries were also enrolled in group micro-insurance and issued with TUPAD identification cards.