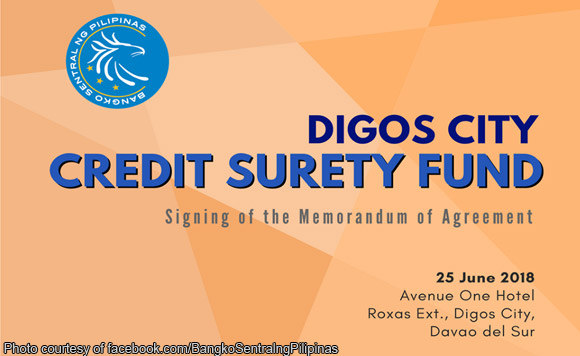 The city government of Digos and 10 cooperatives have pledged to contribute a total of P4 million for the Bangko Sentral ng Pilipinas (BSP)-led Credit Surety Fund (CSF) to be launched next week in the city.

The CSF Program, which was established in August 2008, taps the economic potential of the cooperatives and non-government organizations (NGOs).

The rolling out of the 52nd CSF will be highlighted by the signing of the memorandum of agreement (MOA) at the Avenue One Hotel, Roxas Ext., Digos City, Davao del Sur on June 25.

Managing Director Pia Bernadette R. Tayag of BSP and Mayor Joseph R. Peñas of Digos City will lead the partner institutions, participating cooperatives and various stakeholders in the forging of the MOA.

“Ten qualified cooperatives signified their intent to join the Digos City CSF, contributing an aggregate amount of P2.0 million. In support, the City Government of Digos pledged P2.0 million to the fund,” the central bank said.

The GFIs and IGLF are also expected to put up counterpart contributions to Digos City CSF, it added.

The principal beneficiaries of the CSF are the capital-short micro, small and medium enterprises (MSMEs) which are experiencing difficulty in obtaining loans from banks due to lack of acceptable collaterals, credit knowledge and credit track records.

It is designed to increase their creditworthiness to have better access to bank credit. The Fund will serve as security for loans extended by banks to these MSMEs, in lieu of acceptable collaterals.

As of April 30, a total of P4.68 billion in bank loans secured by CSFs had been released.

The CSF, which is now on its 10th year, is present in 32 provinces and 19 cities nationwide.

DA provides P168M worth of farm machines to Region 12