Dick thankful to Paolo, Mans but livid at Faeldon 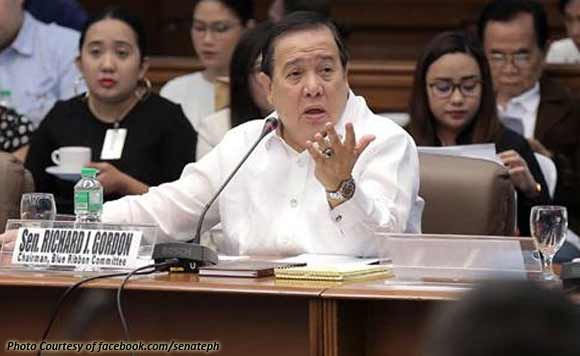 Senator Dick Gordon on Thursday spoke only good words for Davao City Vice Mayor Paolo Duterte and his brother-in-law Mans Carpio for their effort to attend the Senate probe on smuggling at the Bureau of Customs (BoC).

In contrast, Gordon, chair of the Senate Blue Ribbon Committee, rebuked and cited in contempt former Customs chief Nic Faeldon for snubbing the Senate investigation on the smuggling of P6.4 billion shabu from China.

“In as much as there’s a motion to now dismiss you here, you may do so with our thanks and our appreciation. We thank you for your respect for the Senate and the Senate Blue Ribbon,” Gordon said.

On the other hand, Faeldon wrote to Gordon on Sept. 6 to tell him that he would no longer attend any public hearing at the Senate and House of Representatives “in protest” of the alleged baseless accusations of some legislators against him linking him to corruption at the BoC.

“After consulting with everybody here, the chair, orders Capt. Faeldon (to be cited) in contempt and must report here on at the next hearing on Monday,” Gordon said.

“The Sergeant-at-Arms is ordered to make sure that he gets the information and that he is brought here on Monday. But if he does not appear on Monday he will be arrested and brought here to the Blue Ribbon Committee. We will not entertain any defiance of the government in this chamber,” he added.

First appearance of Paolo, Mans in Senate will probably be their last – Dick