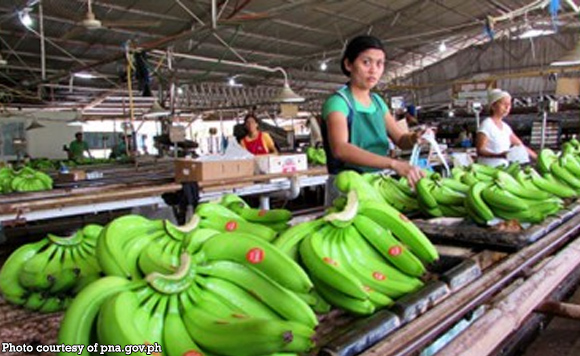 The country’s banana producers on denounced the move of the Davao del Norte government to destroy biosecurity installations used to protect farms from a virus that could wipe out plantations in the province.

The Pilipino Banana Growers and Exporters Association (PBGEA) wants “cooler heads” to intervene in what they perceive as “coercion” by local politikos who might be unwittingly endangering the country’s top agricultural export earner.

In a statement, PBGEA Executive Director Stephen Antig said the provincial government of Davao del Norte, “in its zeal to clear all road obstructions, may inadvertently help destroy the same industry that is paying huge amounts of taxes that pay for the services provided to their constituents.”

The Capitol allegedly wanted to remove the biosecurity features, such as temporary entry barriers, that help guide the public to go through “tire dips” and insecticide sprays for passing vehicles and “footbaths” for pedestrians entering the plantation.

The biosecurity facilities are crucial in preventing the spread of the Panama disease or fusarium wilt.

PBGEA chairman Alberto Bacani said the biosecurity facilities, as a matter of national concern, should not be seen as traffic obstruction.

“These should be seen as a protective measure which helps the community in its income generation,” Bacani said in a statement.

“If you remove these facilities, you destroy the people’s source of income,” he noted.

In areas where there are no biosecurity facilities, Bacani said, Panama disease has already affected banana plantations in barangays of Kimamon, La Libertad, Salvacion, Talomo, Lunga-og, Casig-ang, Balagunan, Tibal-og and Kinamayan, all in Davao del Norte.

About 2,402 hectares of banana plantations were reported to have been affected by the disease and packing houses covering 300 hectares had already shut down.

Antig pointed out this could have been prevented had the local government-imposed biosecurity facilities in the villages traversed by the plantation roads.

Victor Mercado Jr., president of PBGEA, said this incident should help the public appreciate the role and distinction of the local government against national policies on food safety and biosecurity.

Last Oct. 9, the Panabo City Regional Trial Court (RTC) granted Tadeco for the issuance of a 72-hour temporary restraining order (TRO) against the removal of the firm’s biosecurity facility.

For his part, Mindanao Development Authority (MinDA) chairman Emmanuel Piñol said his office was preparing a memorandum of agreement (MOA) between Tadeco and the Davao del Norte government.

“(It will be a) compromise agreement where Tadeco will agree that people as well as vehicles will be allowed to pass through (the road) provided that they will undergo quarantine procedures,” Piñol said in an interview with the media.

The Bureau of Plant Industry (BPI) Special Quarantine Administrative Order 01-2012 has declared the province of Davao del Norte as infected with Panama disease and placed the entire area under quarantine.

Under the order, banana plantations are obliged to implement quarantine and border control measures, such as checkpoints and installation of wheel and foot baths.

Meanwhile, Interior and Local Government Secretary Eduardo Año clarified that Memorandum Circular 121-2019 – which ordered all LGU officials to reclaim public roads which are being used for private ends and in the process, rid them of illegal structures and constructions – should only be used for road clearing of public roads and not for purposes other than intended, including demolishing structures in private lots without notice and just compensation.

The Bureau of Corrections’ Davao Penal Colony (Dapecol) is the owner of the contested land which is being planted to Cavendish bananas by Tadeco under a joint-venture agreement.

Dapecol has already issued a letter to the Davao del Norte provincial government explaining that the farm roads where the biosecurity structures are located are privately owned.

Tadeco fears that they may face penalties if the biosecurity facilities are removed since these installations were mandated not only by a special quarantine order from BPI, but also by a Davao del Norte provincial ordinance issued in 2012.

Antig noted the provincial and local governments should in fact promote the industry since the banana companies are top taxpayers in their respective areas of operation.

“Their constituents are largely dependent on the banana industry for their livelihood. They should help the banana growers, and not interfere in their operations,” he said. (PNA)