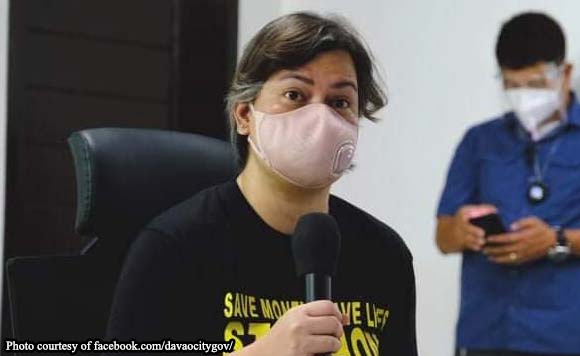 Davao City Mayor Sara Duterte-Carpio has signed an agreement with the United Kingdom manufacturer AstraZeneca for the purchase of vaccines against coronavirus disease for the Dabawenyos.

“We already signed the non-disclosure agreement. We got their commitment to give us the opportunity to procure vaccines from them through the city government of Davao funds,” the local chief executive said.

However, Duterte-Carpio said the city will purchase the vaccines through the national government under a tripartite agreement.

With an estimated 1.8 million population in Davao City, she said the city government has to immunize at least 1.2 million to attain herd immunity from the deadly virus.

The mayor said with two doses of vaccines, the city will need 2.4 million doses, which will be sourced from various pharmaceutical companies, not only from AstraZeneca.

“We will talk to as many vaccine makers, especially those who have intent to apply for emergency use authorization or product certification in the Philippines,” Duterte-Carpio said.