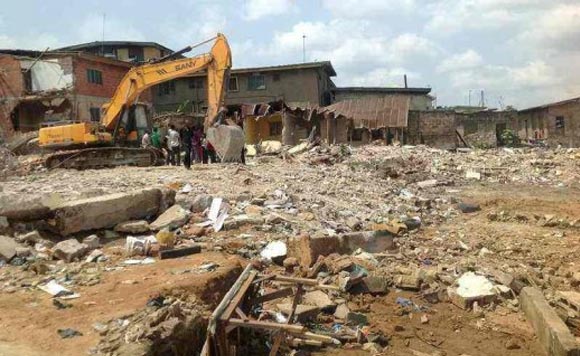 The demolition was carried out after several weeks of tense negotiations between the court sheriff and the owners of over a hundred houses inside a 3,500 square-meter contested property.

Tagum said that in assisting court personnel carry out the demolition, the Davao City Police Office (DCPO) implemented a temporary lockdown in Quezon Boulevard, Bangoy, Lizada and Juan Ponce streets to prevent violence from breaking out.

Several affected residents said they were surprised to find a column of police personnel in the area when they woke up in the morning. At 9 a.m, about 300 demolition men started tearing down houses.

“The demolition operation was generally peaceful and orderly due to the series of negotiations and the overwhelming security forces deployed,” Tagum said, adding the DCPO has deployed more than 1,200 police personnel in the area.

According to Tagum, the police personnel will stay in the area until the completion of the demolition is completed to prevent possible return, or resistance, of the informal settlers.

The house owners and some renters took their appliances and personal belongings to the street. Some even managed to salvage materials that can still be used.

The past weeks saw tense negotiations between the landowner and the settlers.

Last month, the settlers allegedly planned to fight the demolition team by gathering empty bottles, nails, and other blunt materials. The settlers have organized themselves under the the Quezon Boulevard Muslim-Christian Neighborhood Association.

It could be recalled the the court issued a final notice of demolition on March 3, and presented this to the affected families on March 27.

Consisting of 67 households, the families made a last ditch effort by appealing their case to the Supreme Court.

The next step, Baloro said, is to finally identify the affected families because they have been uncooperative since the start of the census tagging prior to the demolition. (Lilian C. Mellejor/PNA)