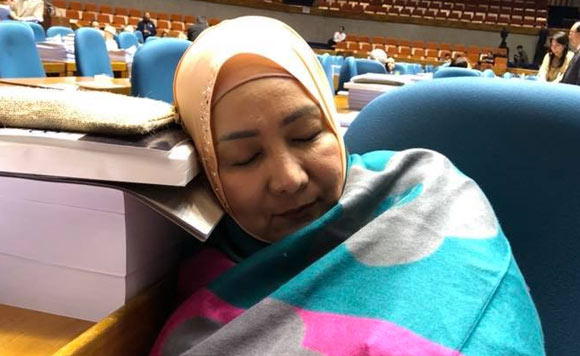 The Politiko shared the story behind her photo, which was taken by her seatmate, Rep. Sandra Sema.

Being a Politiko is truly not for the faint-hearted. Tawi Tawi representative Ruby Sahalo recently explained the story behind her “napping” photo taken by her good friend, Rep. Sandra Sema. On her Facebook, the Politiko narrated how she had incessant meetings during the previous day, from 8AM and got home at 5AM.

She further added how she attended the plenary session for the budget deliberation of the agencies slated for the day, while squeezing in some other meetings in between.

“At around half past midnight at the plenary, my seatmate and good friend Bai Sandra Sema took a snap of me taking a cat nap (but really I was just resting my eyes for a few minutes) as a joke, and we had a good time laughing about it. We stayed until the termination of the budget deliberation for DPWH, and called it a night”, she wrote.

She further said that she has to do what she can for the people of Tawi Tawi. Laban, Congresswoman!