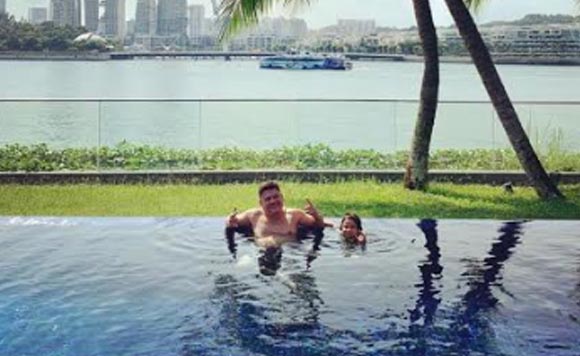 0 114
Share
Want more POLITIKO News? Get the latest newsfeed here. We publish dozens and dozens of politics-only news stories every hour. Click here to get to know more about your politiko - from trivial to crucial. it's our commitment to tell their stories. We follow your favorite POLITIKO like they are rockstars. If you are the politiko, always remember, your side is always our story. Read more. Find out more. Get the latest news here before it spreads on social media. Follow and bookmark this link. https://goo.gl/SvY8Kr

Paolo Duterte’s youngest is truly a carbon copy of his papa.

Youngest Presidential apo Paolo “Uno” Duterte II, was recently photographed with his twinsie, his dad, Davao Representative Paolo “Pulong” Duterte. The Presidential apo shared a photo of him and his dad on his Instagram, while enjoying a cool dip in a pool in Singapore.

After Paolo resigned from his post in December 2017, the Politiko expressed his intent to just spend more time with his kids and family. Following his break from politics, former VM Pulong recently won as 1st district representative of Davao City during the 2019 midterm elections.

Uno is the youngest son of Paolo Duterte with his second wife, January Navares. He has three older kids with his former wife, Lovelie Sangkola Sumera, namely Omar, Rodrigo II and Isabelle.

Ex-Abu Sayyaf members given a tour of Batasan — Hataman