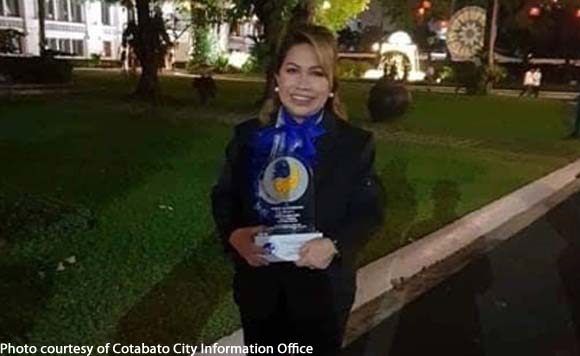 0 87
Share
Want more POLITIKO News? Get the latest newsfeed here. We publish dozens and dozens of politics-only news stories every hour. Click here to get to know more about your politiko - from trivial to crucial. it's our commitment to tell their stories. We follow your favorite POLITIKO like they are rockstars. If you are the politiko, always remember, your side is always our story. Read more. Find out more. Get the latest news here before it spreads on social media. Follow and bookmark this link. https://goo.gl/SvY8Kr

COTABATO CITY — The local government here has earned the most coveted Presidential Child-Friendly Award in recognition of its programs for the welfare of children in the city.

Mayor Cynthia Guiani-Sayadi received the recognition during awarding ceremonies on Friday in Malacañang.

Sayadi said Cotabato was the lone city in Mindanao that earned the award, and one of only four in the first-class cities category. The other awardees were Naga City, Ormoc City, and Dagupan City.

Sayadi said the programs and activities for the welfare of children, especially on education and health, have paid off.

The city government received a PHP500,000 cash award to be used to undertake more programs for the welfare of the children.

“This (award) inspires us to do more for the welfare of our children,” Sayadi wrote on her social media account after receiving the award. (PNA)