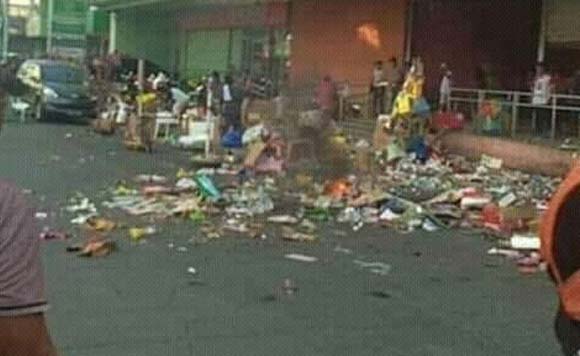 One of the two suspects in the Dec. 31 bombing in front of South Seas Mall here has voluntarily surrendered to police authorities.

Lauban said the family decided to bring him to the police office to clear his name and deny his involvement in the crime.

Lauban, who presented Pasandalan to Senior Supt. Rolly Octavio, city police director, said the suspect has no capability to do such crime due to his mental condition.

His image went viral in the social media after the police released the photos of two persons of interest in the bombing that left two dead and more than 30 others injured.

He claimed that Pasandalan, single, a resident of Barangay Awang, Datu Odin Sinsuat, Maguindanao, has a mental disability.

The CCTV footage showed Pasandalan accepting a backpack passed to him by another person that contained the second bomb and left it at the adjoining Philippine Charity Sweepstake Office outlet and baggage counter at the mall’s second-floor area.

Members of the military’s Explosive Ordnance Disposal Team later disarmed the second bomb. Pasandalan is now under police custody while SITG South Seas is yet to issue a statement on the matter.

The other person of interest remains at large. (PNA)