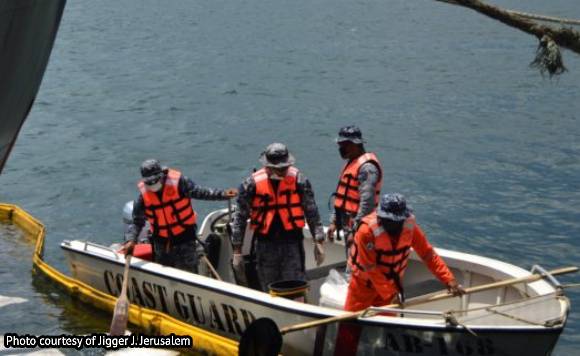 CAGAYAN DE ORO CITY – The Philippine Coast Guard in Northern Mindanao (PCG-NM) on Friday began investigating the oil spill that occurred on the seaport of Barangay Macabalan, this city.

The oil spill was first reported to authorities by crews of the ships docked at the Macabalan port Thursday morning, said Ensign Jerich Ybañez, PCG-NM spokesperson.

“As soon as we got the information, we then referred it to our MEPU (Marine Environmental Protection Unit) which responded right away,” Ybañez said.

He said the MEPU contained the spill by retrieving the oil through absorbent pads and cordoning the area with “spill boom,” a floating barrier used to contain an oil spill.

As of Friday, the oil spill has already been contained as the PCG is now determining who was responsible for dumping the substance into the sea, he said.

“We have collected samples from the oil spill. As of the moment, we have investigation,” Ybañez said.

He said they are now tracing the source of the spill through the samples they have gathered from the sea and from the shipping lines docked at the port.

Since Thursday, the PCG-NM has collected about 210 liters of concentrated and diluted oil from the spill, he said.

At the Macabalan port where a team from the PCG-NM was conducting the clean-up, ships coming mostly from Vietnam can be seen unloading tons of imported rice onto waiting cargo trucks.

“There is a ‘footprint’ and we are going to take the ‘footprint’ of what we have collected. From there, we will know where the oil came from,” he said, adding that once they have traced the oil spill to a particular ship, they will then prepare a complaint with the imposition of sanctions and penalties to follow.

He also said that it was good that his team was able to contain the spill immediately, as they have also coordinated with the Philippine Ports Authority and other agencies so they can prepare for any eventualities.

Commander Jonie Belarmino, head of the PCG’s MEPU in Northern Mindanao, said the oil spill could have an adverse effect on the marine life such as fish, corals, and mangroves if it was not contained.

He also said that the spill has reached a stretch one nautical mile or 1.852 kilometers when it was first reported.

“There was a possibility that it could escalate. So far, we have contained it through the use of the spill boom to prevent it from further spreading,” he said.

Belarmino appealed to shipping line operators to be mindful of their actions that could impact the environment such as discharging wastes in bodies of water.

“Ship operator and seafarers are all aware that disposing of oil into the sea is strictly prohibited. It is our responsibility to take care of our oceans,” he said. (PNA)