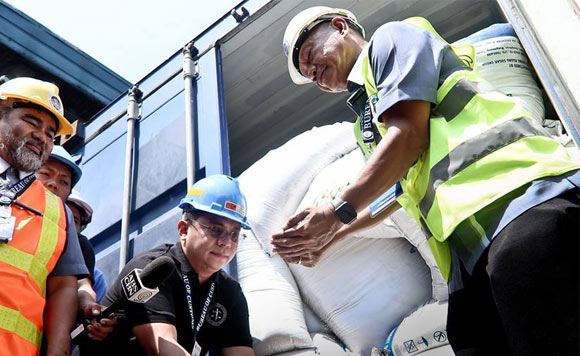 The Philippine Coastguard (PCG) on Saturday turned over to the Bureau of Customs (BOC) the P10 million worth of smuggled sugar seized during the rescue of a wooden-hulled vessel off Tawi-Tawi.

The vessel, M/L Sabrina, was rescued on Monday (Aug. 13) near the island town of Mapun in the province of Tawi-Tawi with 13 people aboard. The turnover was held shortly after M/L Sabrina, towed by the BRP-Cape San Agustin of the PCG, arrived at the local port early Saturday.

Lt. Commander Noriel Ramos, Zamboanga Coastguard Station commander, earlier said M/L Sabrina drifted at sea after it experienced mechanical trouble while traveling to the Philippines via Tawi-Tawi from Sabah–a Malaysian state that the Philippines has a dormant claim on.

“I am in my regular port visit and meeting with the BOC personnel here,” said Lapeña, who arrived early Saturday.

Capt. Joseph Coyme, Coastguard District Southwestern Mindanao commander, said they discovered that M/L Sabrina was loaded with smuggled sugar when they conducted an on board inspection after it was towed to Mapun port.

Coyme said they were informed that M/L Sabrina was carrying 6,000 bags of sugar but at least 1,000 bags were thrown overboard to keep the vessel afloat.

“They are taking in water and just to keep the boat afloat they throw at least a thousand bags,” Coyme said based on the claim of the boat skipper.

Lawyer Lyceo Martinez, BOC district collector, said the 5,000 bags of 50 kilos sugar is worth PHP10 million based on the selling price of PHP2,000 per bag.

Martinez said they will issue a warrant of seizure and detention order for the sugar, including M/L Sabrina.

“It will be taken into custody by the customs and thereafter, we shall proceed with the auction proceeding so that these sugar will be dispersed to the market,” he said.

Lapeña said they have yet to determine the ownership of the confiscated smuggled sugar.

“What we have at hand are documents indicating the name of the motor launch and the list of crew,” Lapeña said.

He said appropriate charges will be filed against the people behind the smuggling. (PNA)