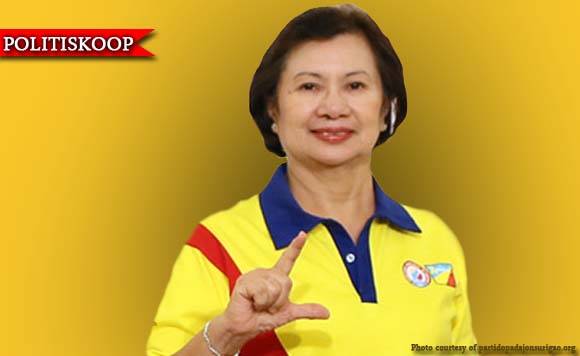 0 252
Share
Want more POLITIKO News? Get the latest newsfeed here. We publish dozens and dozens of politics-only news stories every hour. Click here to get to know more about your politiko - from trivial to crucial. it's our commitment to tell their stories. We follow your favorite POLITIKO like they are rockstars. If you are the politiko, always remember, your side is always our story. Read more. Find out more. Get the latest news here before it spreads on social media. Follow and bookmark this link. https://goo.gl/SvY8Kr

Surigao Del Norte Governor Sol Matugas looks like she has a lot on her plate after the Commission on Audit (COA) hit her employees for using public funds to pig out.

In its 2014 audit report on the province, the COA said the province spent P10.6 million for meals and snacks alone from Jan. to Nov. 2014.

This is also not the first time the provincial government was hit for being gluttons. The audit agency noted that the practice of spending millions for food had been raised in last year’s audit report, and that only the Sanggunian Panlalawigan stopped its practice of pigging out this year.

“This audit observation has been one of the audit findings embodied in the Annual Audit Report (AAR) for Calendar Year 2013, but still the practice existed, except for the Sangguniang Panlalawigan Office who really acted and put into practice our recommendation showing responsiveness to the greater interest of public service,” COA said in its report.

More than the gluttony, the COA said such expenses were charged from the maintenance and other operating expenses (MOOE) when these should have been charged from the representation expenses in compliance with audit rules.

COA said the provincial government also violated an administrative order which says that “no money shall be appropriated, used, or paid for entertainment or reception except to the extent of the representation allowances authorized by law or for the reception of visiting dignitaries of foreign governments or foreign missions, or when expressly authorized by the President in specific cases.”

“Moreover, we most respectfully invite the attention of the Management to the provision of … Administrative Order No. 270 wherein meals and snacks is only to the extent of the representation allowances and during visits of dignitaries. Expenses incurred are truly not in accord or violated said rule and regulation,” COA said.

The audit agency recommended to the budget and accounting officer to strictly follow audit rules.

“If expenses for meals are inevitable, charges should be made to its proper account, otherwise, commission of the same will be dealt with accordingly,” COA said.

During the exit conference, the audit body and the provincial government agreed that using the MOOE for food may be allowed if the expense is necessary and price reasonable and economical.