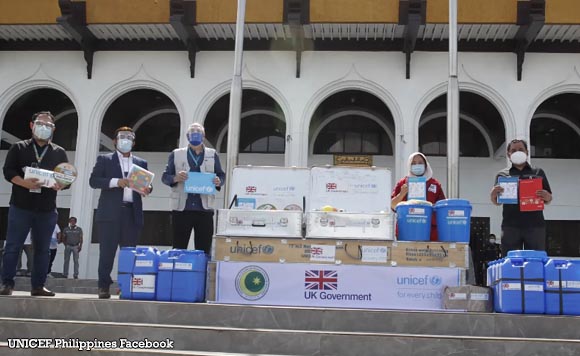 This as officials of the Bangsamoro Autonomous Region in Muslim Mindanao (BARMM), United Kingdom, and Unicef forged a partnership to strengthen the Covid-19 response in the region.

Alastair Totty, British deputy head of mission to the Philippines, said the first aim of the partnership is “to reach some three million people across the region with Covid-19 messages,” including the risk communication and community engagement.

The support bolsters Unicef’s response, by providing supplies, training and technical support to the Bangsamoro government.

The regional government said the supplies procured by Unicef include tents for hospitals, personal protective equipment (PPE) for health and cleaning staff, and handwashing stations. Unicef also trained health workers in Infection and Prevention Control, translated and disseminated health messages to various dialects, and engaged children and youth to share their experiences of the pandemic as a way to inform future action.

As of Tuesday, October 13, BARMM has recorded 29 new recoveries, raising the number of total recoveries to 1,005 from its 1,385 total cases. The region has remaining 326 active cases and 54 deaths.