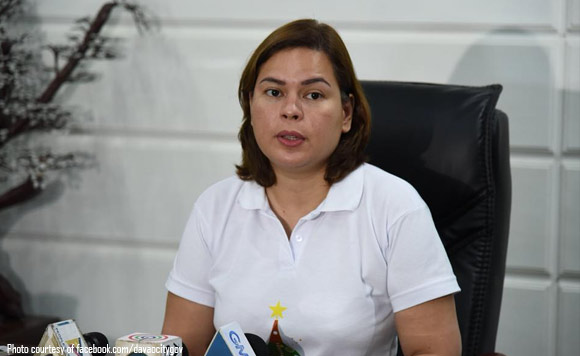 A mall fire that left at least one person dead and nearly 40 others still missing has prompted the Davao City government to postpone its Christmas and New Year festivities this year.

This includes the Pasko Fiesta events, though the Kan-anan sa Tribo in Magsaysay Park and Kaandabaw in Palma Gil Street will be open.

Mayor Sara Duterte-Carpio said this is “not the time” to celebrate or hold parties.

“What we should do is — Number 1, stay with our families to celebrate Christmas with them. And Number 2, we say our prayers and thank God for the blessings that we have received for the past year,” she added (https://www.facebook.com/davaocitygov/posts/1723154754402706).

The mayor also cited the effects of Tropical Cyclone Vinta (Tembin) on parts of Mindanao.

According to Duterte-Carpio, this is “not the time” for merrymaking and partying as she urged residents to help in relief efforts for those affected by Vinta’s floods.

At least one body was recovered from the fire site as of Sunday, with at least 36 others still missing and feared dead.

President Rodrigo Duterte, Duterte-Carpio’s father, wept upon visiting the area where the fire

On the other hand, Vinta affected at least 18,308 families in 25 barangays in Davao City.

Meanwhile, the mayor asked city councilors to authorize her to declare the city under a state of calamity.

She is to meet with the councilors on Monday, December 25 to decide on the matter.