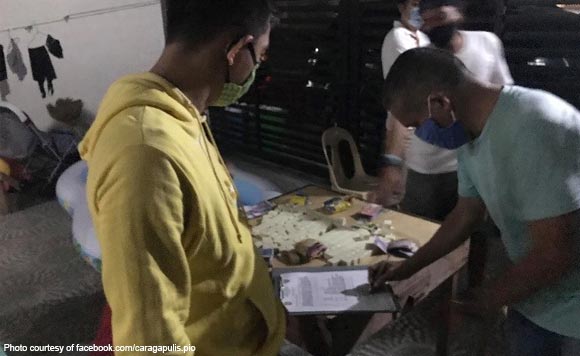 A Chinese national who is manager of ZCC Mall in Surigao City and four other Chinese nationals including three Filipinos were arrested by PNP operatives on April 14 in Purok 3, Shangrila Homes, Barangay Imadejas, Butuan City.

Confiscated from their possession and control were one set of karton playing cards, one plastic table, three plastic monoblock chairs, two bottles of San Miguel Pilsen beer, two glass cups, and cash money amounting to Php 13,320.00, Php 6,290.00 and Php 8,120.00 in different denominations, respectively, with a total of Php 27,730.00.

Allegedly the Chinese nationals resisted arrests and disobey persons of authority at first but later surrender themselves to authorities.

When asked by the assisting barangay officials and cops about travel history and identification papers of the Chinese nationals, one of the nabbed violators, William Mae Ricafort, 27, reportedly engaged persons in authority into heated argument.

No addresses in China were given in the police report.

According to Chief of Police Fuentes, aside from conduct of illegal gambling charges, all eight nabbed violators will be facing violation of Revised Penal Code Article 151 or Resistance and Disobedience in Persons of Authority, and violation of local Executive Order No. 23, or the Executive Order Placing the City of Butuan in an Enhanced Community Quarantine.

Butuan City Police claimed further investigations will also be conducted, as there are now estimated 2,000 chinese nationals living in Butuan City and Agusan provinces alone not including those living in Surigao provinces and their numbers increasing.