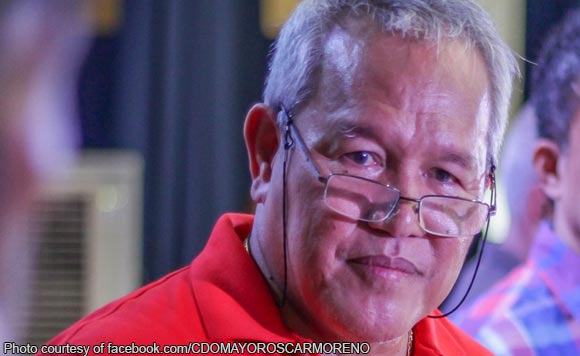 CAGAYAN DE ORO CITY — Embattled Mayor Oscar Moreno said his arraignment at the Sandiganbayan for graft cases would give him a chance to answer all charges filed against him in court.

Moreno’s lawyer, Bryan Dale Mordeno, said the mayor appeared before the Sandiganbayan’s Second Division on Friday (Dec. 7) and pleaded not guilty to the 13 graft cases filed against him.

Moreno was charged for approving road projects without following a proper bidding process during his term as the governor of Misamis Oriental.

Moreno served for three terms as governor and became the city mayor in 2013. He is now on his last term as mayor.

In his weekly radio program at dxCC here Friday evening, Moreno said he was glad with the arraignment, as this would mean that he will have his day in court.

“We will just wait for the trial. We are confident that we will be vindicated. I am not worried of these cases,” he said.

Moreno said his detractors just want to disrupt his official functions as mayor through a barrage of cases.

“What they want is to make my life difficult, to taint my name. [But] we will overcome all of this. We will prevail,” he added.

He said it’s now up to his lawyers to handle his cases, adding that there is no need for him to attend the hearings.

It can be recalled that Moreno, together with several former Misamis Oriental provincial government officials, were charged with violation of the Anti-Graft and Corrupt Practices Act.

The Office of the Ombudsman said the respondents awarded contracts to heavy equipment rental companies without the conduct of public bidding required under Republic Act 9184 or the Government Procurement Reform Act.

The Ombudsman said the respondents allegedly resorted to negotiated procurement without any valid justification or exemption provided under RA 9184.