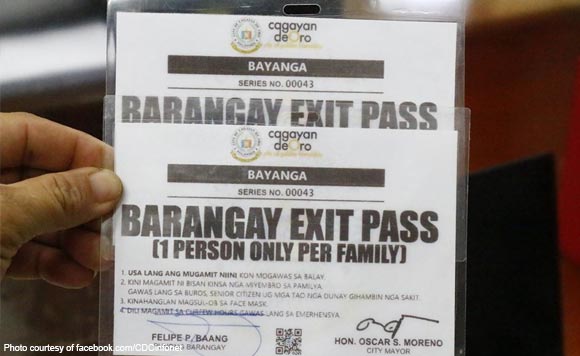 The local government unit here has vowed to go after those involved in authorized reproduction of Barangay Exit Passes (BEPs), as part of the broader strategies to strengthen existing community quarantine measures.

This came after two residents in Barangay Bayanga were held by police for allegedly duplicating the BEP on Thursday.

Authorities warned violators will be charged with falsification of public documents and violation of Executive Order No. 062-2020 that mandates the use of BEP as a containment measure against Covid-19.

He said they were conducting random inspection in Sitio Calaanan, Barangay Canitoan, when the woman caught the RCB’s attention.

“We asked for her barangay exit pass, but what she showed us was a photocopy and not the original one,” Resma said.

BEP allows residents to go out of their houses to buy essential items such as food or medicine. It can also be used by residents when they transact business at financial establishments such as banks or money-transfer outlets, and government offices outside their barangay.

Those who are sick, pregnant, or elderly are not allowed to use the BEP, nor are they permitted to go out except in emergency or medical situations.

Maj. Aldren Baculio, the Bulua police commander, said the person who photocopied the exit pass seized from the woman will be held liable for falsification of public documents.

Mayor Oscar Moreno earlier underscored the importance of limiting the movement of people and transportation in the city, saying this was one of the more effective ways “to beat the coronavirus.”

“We can flatten the curve by staying home,” Moreno said.

Maj. Evan Viñas, city police spokesperson, said in a separate interview that since the BEP was implemented on April 20, dozens have been caught without an exit pass.

On April 21, Viñas said 113 persons were nabbed for failing to present a BEP or wear a face mask, which was made compulsory by the city government.

Viñas said that since the curfew was implemented on March 19, some 2,700 persons have been arrested.

He said quarantine violators are reprimanded and are ordered to watch a video documentary on the coronavirus as part of the information campaign of the government.

“We want them to be aware of the risks of the coronavirus so that they will abide by the laws the government has set to fight the virus,” he said. (PNA)