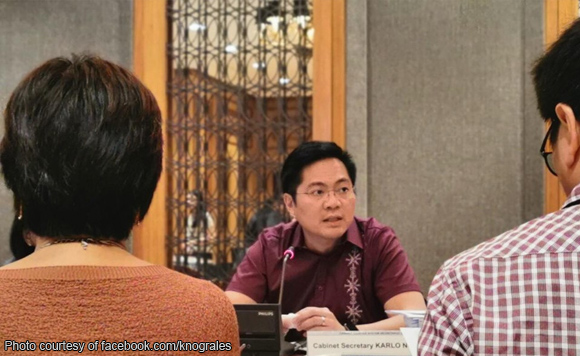 0 185
Share
Want more POLITIKO News? Get the latest newsfeed here. We publish dozens and dozens of politics-only news stories every hour. Click here to get to know more about your politiko - from trivial to crucial. it's our commitment to tell their stories. We follow your favorite POLITIKO like they are rockstars. If you are the politiko, always remember, your side is always our story. Read more. Find out more. Get the latest news here before it spreads on social media. Follow and bookmark this link. https://goo.gl/SvY8Kr

Cabinet Secretary Karlo Nograles has lauded Caraga Region for the localized implementation of Executive Order (EO) No. 70 at the grassroots level.

Nograles, the Cabinet Officer for Regional Development and Security (CORDS) and Chairperson of the Caraga Regional Task Force-End Local Communist Armed Conflicts (RTF-ELCAC), together with National Security Adviser Hermogenes Esperon, were invited as keynote speakers in the Barangay Summit on EO 70 and Covenant Signing Thursday, September 12, at the Balanghai Hotel in Butuan City.

The event was organized by the Regional Development Council and the Regional Peace and Order Council – Caraga Region.

Nograles stressed that what they did in Caraga would be the template used in other regions for the localized implementation of EO 70.

“We did it in Caraga, and we can replicate the success in other areas,” he said.